SPECIAL FEATURE: The “demons” Baron Geisler should cast out 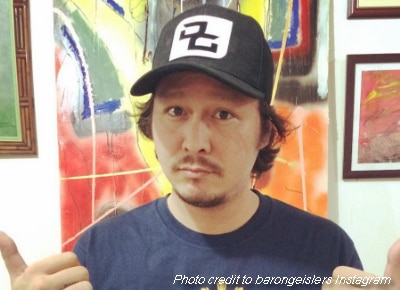 Again, Baron Geisler, one of the best actors of his generation, makes headlines.
And, quite expectedly, it wasn’t about his artistic exploits, but another incident wherein his rather uncontrolled, vexing behavior took another turn for the worse.

This time, student filmmakers got the raw end of his wrath after they displeased him going to a set without a prepared script he was supposed to use for a project they were working on. Enraged over the inconvenience as they met on the set, Baron cursed and cussed the UP Fine Arts students producing the film despite their repeated apologies, to the point of pushing, shoving, and headlocking one of them, as shown in a viral video.
‘Doon ako pumitik’
As Baron explained to Push, “Doon ako pumitik” after arriving on time for the 9am call time after only two hours of sleep since packing up from another shooting in Laguna at 3am and not having the script he had asked from the students for five days.

But despite his explanation, most who watched the video saw his actions as uncalled for and excessive. This wide condemnation became Baron’s basis of a planned suit against the student director Khalil Verzosa, who he said intended to further besmirch his already damaged reputation by uploading the video on his Facebook account.
Baron claimed he was not drunk, nor high on illicit drugs. But indeed, sadly, that volcanic and volatile temper seemed more prominent and remembered than his noteworthy, award-winning performances as an actor. His detention three years ago for “physical injuries,” “malicious mischief,” and “child abuse,” took a toll on his otherwise remarkable career as an actor after he beat up a Quezon City neighbor in front of the latter’s wife and kids.

Bipolar disorder
He had admitted suffering from extreme bipolar disorder that leads him to have irrepressible bouts of anger. Baron had gone under rehab and medication to control this illness, among other addictions such as alcoholism.
Another result of his frenzied demeanor is his run-ins with female celebrities, such as Patricia Martinez and her mom Yayo Aguila, Cherry Pie Picache, Yasmin Kurdi, and Julia Clarete, over alleged sexual harassment and unjust vexation.
But who can forget his biggest heartbreak that he claimed started his downspiral—being dumped by his teen love interest Jodi Sta. Maria over his alcoholism.

Demons
Indeed, Baron faces a lot of “demons,” battling an unsettling urge to revive fits of notoriety despite his constant desire to control and overcome it.

This latest incident is yet another challenge for Baron to overcome and learn from. Controlling his anger is a paramount goal for him, even he justifies his actions to the end, and that going “beast mode” never solves anything but only complicates and worsens the problem.

As in previous altercations, Baron must overcome this by accepting and admitting his own transgressions and try to do something about it—maybe have his bipolar disorder further treated or undergo anger management classes—to emerge better off from such an incident and not get the brickbats.
Above all, we all really want to focus our attention on Baron, the renowned thespian, artist, actor and performer who deserves so much praise for his craft, not the “wild”, “berserk” brute who roughs up hapless people just because he lacked sleep or was inconvenienced by not having a ready script.
Celebrity