Marvin Agustin reminisces how he was as a student when he was a kid. 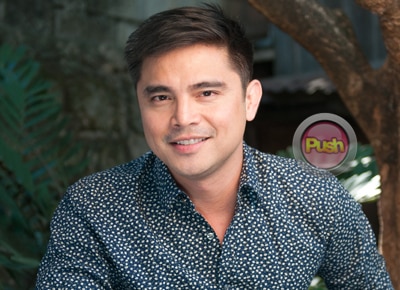 When Marvin Agustin had a shoot for the Entreplab School last May 15, he had a dose of nostalgia as he roamed around his former school and reminisced about how he was as a student.
“We shot at the Entreplab School campus. It is located on the former Sta. Rita College-Annex grounds, a campus which was my alma mater, and where I spent a good 10 years of my life growing up,” he wrote in an open letter that was posted on his Facebook page.
When the successful chef and entrepreneur heard the voice of the strict teachers reprimanding makulit students just like him, he chuckled.
“Makulit na talaga ako non, and I have to admit, I did not have the highest of grades, if anything, I was ‘struggling to learn’ sabi nila,
“But maybe it was because Math formulas, past participles and laboratory reports never really appealed to me as something I needed.”
He had gone into a deep realization and asked himself, where the misbehavior rooted from.
“Beneath the jokester was someone who yearned to learn the challenges of real life- what I thought I needed to succeed. In that corner of the room, I was always caught in daydream, visualizing my future that none of my books could picture for me,” he wrote.
Now with all these realizations, Marvin is hoping that the school would help the future students continue to get inspired and have an unending fire of passion and creativity.
Read Marvin’s entire open letter below:
Celebrity