Jake Cuenca stresses that he is still willing ‘to drop everything’ for Sara Grace Kelley. 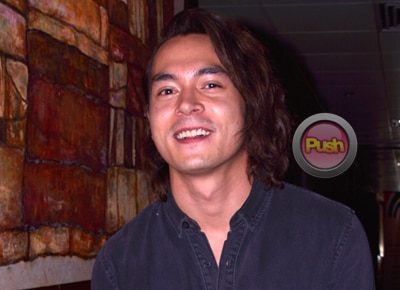 Jake Cuenca confirmed that he spent time with his ex-girlfriend, model Sara Grace Kelley during his recent trip to New York.
In an interview with Jake during the announcement of his upcoming show Because You Love Me together with Gerald Anderson and Yen Santos, he shared that he remains happy for Sara.
“Everything she’s accomplishing, I’ll always be here to support her. If she needs me, I’m there. I’ll help her out,” he stressed.
“Kahit na ex ko na yung my last girlfriend, but because maybe I love her unconditionally, parang kahit hindi na kami in love sa isa’t isa, I’ll drop everything to go there if she needs me,” Jake added.
It was around March when the Pasion de Amor star confirmed that he and Sara had parted ways. According to him, they decided to split last December because of a long distance relationship since she was slated to move to New York at that time.
“And kahit nag-break na kami, magkaibigan kami. I’d still be there for her if she needs me,” Jake said.
In a previous interview, Jake claimed that he and Sara have agreed not to be in a relationship with other people at the moment.
Does it mean that it is easier to work when a person is single?
“No, kayang-kaya yan. Actually, love inspires you to be the best that you can be,” he explained.
It seems that Jake is taking his time as of the moment.
“Nandoon ako sa proseso na minamahal ko ulit yung sarili ko. At bago ako magmahal ulit, kailangan mahal ko muna ang sarili ko. So that’s what’s happening right now,” he ended.
Celebrity