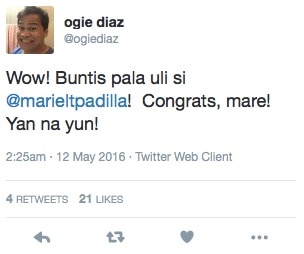 Entertainment reporter -actor Ogie Diaz revealed the good news in the wee hours of Thursday morning via a tweet on his account.

He likewise congratulated the It’s Showtime host about her upcoming bundle of joy.

This would be the Mariel’s third pregnancy after suffering from miscarriage twice last year.The first one happened around March of 2015.

Mariel’s second miscarriage meanwhile happened in August where she unfortunately lost their triplets.

In a previous interview, Robin said they have to wait for a year after Mariel's miscarriage to try conceiving again as per their doctor's orders.