Ketchup Eusebio admits he wants to do more kinds of roles. 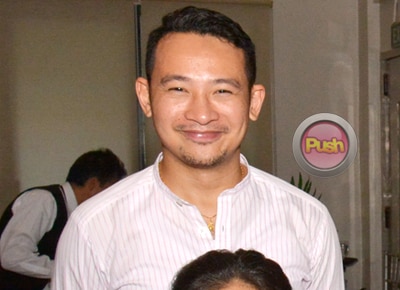 Currently busy promoting the upcoming rom-com My Candidate, Ketchup Eusebio admitted he enjoyed the role personally offered to him by his good friend and director Quark Henares. "I just got a phone call from Quark and he asked if I could do this movie. He’s a very good friend and I didn’t know what to do, I didn’t know what the role was about. He said, ‘Basta I’ll discuss it to you when you get to the set.’ Nung nalaman na namin tawa na lang kami ng tawa dun sa character na gagawin ko na si Jopher,” he told Push.com.ph.
In the film, Ketchup plays an actor who seeks help from Shaina Magdayao. "Ang role ko dito ay isang artista na may sex scandal at ang life coach ko ay si Billy Bono na ginagampanan ni Shaina Magdayao. You can say that my character is a naughty actor na minsan wala siyang pakialam, talagang na-i-involve siya sa mga ganung klase ng scenario na nagkakaroon siya ng relationship sa mga may asawa,” he shared.
Ketchup admitted working with the cast of My Candidate was fun especially since he had done a movie with Shaina before. "We used to be brother and sister in Tanging Ina before so yeah I saw her nung nagdadalaga pa lang. Shaina has always been a good friend. All of them, si Derek (Ramsay) and Iza (Calzado) especially si Quark din so parang yung dating sa set is parang party lang siya pag nagsama-sama,” he added.
Aside from My Candidate, Ketchup is also part of the cast of the Star Cinema hit Just The 3 of Us which already opened in theaters last week. He plays the role John Lloyd’s Cruz’s best friend.
The 30-year-old actor admitted he is getting excited to be part of a Cinemalaya film entry in August. This will also be his first starring role in a movie alongside good friend Janus Del Prado "It just so happened na nagkasabay yung movies ng playdate. Naurong lang yung playdates namin with that because we had some minor problems. Aside from My Candidate and Just the 3 Of Us we just started an indie film namin ni Janus (Del Prado) for Cinemalaya. Maganda yun. Ang Bagong Pamilya ni Ponching ang name. It’s another comedy na medyo may heartwarming part na me and Janus na our first time na project na indie film festival. So this is right after Ningning I’ve been trying to finish these three projects at the same time. So yes God is good. Hanep,” he said.
Celebrity