EXCLUSIVE: Mara Lopez is surprised that fans think she is the third party in ‘The Story of Us’

Mara Lopez also talks about her new indie film ‘T.P.O.’ and how it is relevant in society today. 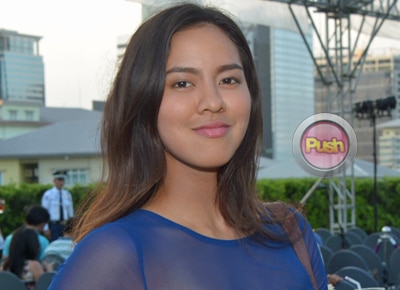 Having done four Cinema One Originals and two Cinemalayas, it was Mara Lopez’s first time to join the Sinag Maynila Film Festival and to play the role of a battered wife in the entry entitled T.P.O.
Saying that it’s an honor to become a part of the independent film festival, Mara shared that their entry started out as an experimental film. “It is my first time playing an abused wife, emotionally, physically and mentally abused wife. And for this project naman with Direk Jay (Altarejos), it started out kasi as medyo experimental film so it was my first time entering a project na ang alam ko lang ‘yung storyline pero walang script. So for me, as an actress, it was very challenging but the thing is, I really do trust how the brain of Direk Jay Altarejos works,” she said, adding that the pieces came together as they shot the scenes.
Believing that their movie has a significant social relevance, Mara said, “A lot of people, I think, who are abused, they’re afraid to speak out eh so para sa akin, this film will also show that side of the abused and of course, when the abused is able to take courage na.”
Sharing that she had a lot of adlibs in the making of this film, Mara was asked where she gets her inspiration or “hugot” for the character.
“Hindi naman kailangan maging physically abused ka to be able to find a hugot, di ba? I mean, as a woman, I have been hurt emotionally a lot of times so I guess when it comes to that, marami naman akong mahuhugutan na place in my heart,” she said, clarifying that she is not heartbroken now.
Aside from T.P.O, Mara is also shooting for the primetime teleserye, The Story of Us. Describing her working experience, she said, “It was really fun. I was able to work with two brilliant directors again, si Direk Richard Somes and Direk Will (Fredo). Grabe, ang saya ng shoot. I’m there as a guest role so medyo nahirapan ako kasi I have to give birth there so medyo intense ‘yung mga scenes but it was fun working with all of them.”
Commenting on the fact that some fans thought that she will be the third party in the love story of the lead characters Tin and Macoy (played by Kim Chiu and Xian Lim), Mara said, “Actually, oo nga eh. Pero iba ‘yung ka-love team ko dun ah… Marami na ngang nagcocomment sa Instagram ko, ‘Ha? Nabuntis ka niya?” Parang oh no, I don’t even have scenes with Xian.”
“Let’s see when it comes out na,” she added.
Celebrity