KathNiel will be directed by Olivia Lamasan for their next film 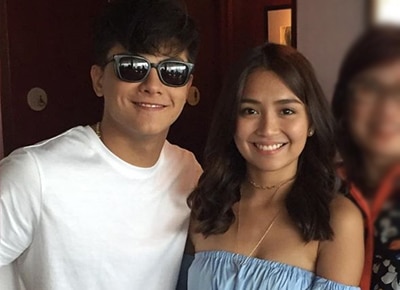 Kathryn Bernardo and Daniel Padilla are upping their ante in their next film as the two would be directed, for the first time, by award-winning filmmaker Olivia Lamasan.
The top Kapamilya love team made the announcement in an interview after the appreciation lunch for their recently concluded soap Pangako Sa’Yo.
According to Kathryn, 90% of the movie will be shot in Barcelona, Spain. While the ocular for their shooting venue is still underway, the two shared that they would be leaving the country around last week of May.
Moreover, they revealed that they would be taking Spanish lessons for their roles.
Daniel, even joked, “Kapag marunong nako [mag-Spanish] hindi nako magtatagalog.”
The actress who just recently turned 20 said that they are very grateful that Inang—as Direk Olive is fondly called in the industry—took on the project.
“Mukhang maraming preparations kasi alam namin si Inang, bihira siya gumawa ng pelikula and sobrang pasasalamat namin dahil tinanggap niya ang project na ito. Excited talaga kami,” Kathryn said.
She added, “Sabi nga namin ni DJ, itotodo talaga namin dito sa movie. We are very thankful kasi pinaghahandaan talaga ng lahat itong pelikula.”
On a serious note, the actor who is set to turn 21 this month is seemingly aware of the directing strategy of Inang.
“Hindi ko naman masasabi kung ready ako pero I’ll do my best. Gagalingan namin ni Kathryn. Siyempre nandiyan naman si Direk Olive para gabayan kami sa lahat ng eksena namin. Hindi niya kami titigilan hangga’t hindi niya nakukuha yung gusto niya. Talagang excited din kami doon,” he said.
The director, who has helmed 13 feature films to date, has the following blockbusters as her creations: Madrasta, Milan, In The Name of Love, The Mistress, and Starting Over Again.
No specific release date has been said for the movie as of the interview but they said that it would be out in cinemas this year.
Celebrity