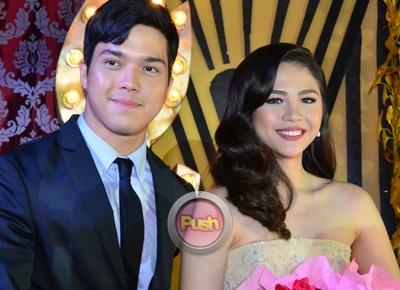 Janella Salvador said that she is now more comfortable working with Elmo Magalona since they have gotten to know each other more during their taping for Born For You overseas. “Masaya naman, mas naging close kami ni Elmo, siyempre nag-Japan kami, we’re together for ten days at mas nakilala na namin ang isa’t isa.  Kasi when they first told us na we’re going to work together, first time talaga naming magkakilala so now we’re more comfortable,” she said in an interview with Push.com.ph.
When asked if she felt awkward working with Elmo initially since the actor has a girlfriend, she replied, “Okay lang naman, I’m just going with the flow. Siyempre you’re going to be friends, ang una ko namang naiisip is to get close to him, to get to know him, kasi siyempre we’re going to be working for a long time.”
Is she going to play a more mature role in her new soap?  “It’s more mature in a sense na ‘yung character ko is college na pero it’s still a feel good, hindi talaga siya ‘yung mature talaga, feel good pa rin siya.”
Aside from being busy with her new soap, Janella is also busy with Himig Handog P-Pop Love Song 2016. She was chosen as one of the interpreters together with her former ka-love team Marlo Mortel for the song “Mananatili”. “I’m happy kasi siyempre I get to share the stage this time with Marlo,” she said.
Janella admitted that she has been missing Marlo since they have been doing separate projects now. “Oo naman nami-miss, siguro we’ve been together naman for more than two years, three years na, so like sobrang comfortable na kami sa isa’t isa and I’m going to miss my kulitan with him,” she shared.
What does she think is their edge over the other P-pop entries? “Actually hindi ‘to bias, when I first heard the song I liked it and alam kong sabi ko may laban ‘to. I believe in our song.” When asked if there is any pressure on her part to top the competition since she claimed the third Best Song in the competition last year, she replied, “Hindi naman sa pressure, siguro you just want to make this time better.”
Celebrity