Charo Santos-Concio was honored with the Rotary Peace Award for 2016 by the Rotary Club of Makati. 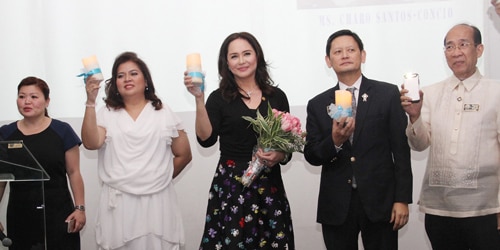 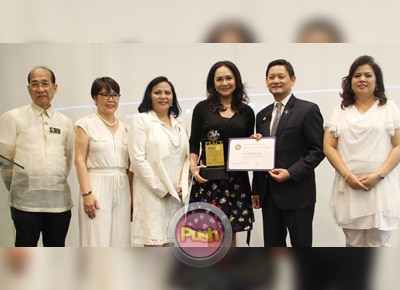 ABS-CBN executive adviser to the chairman, chief content officer, and ABS-CBN University president Charo Santos-Concio was honored with the Rotary Peace Award for 2016 by the Rotary Club of Makati on Monday (April 4), in a ceremony held at the Ayala Museum, Makati City.
In accepting the award, Charo said ABS-CBN tries to make a positive influence to the lives of their viewers through their shows and programs and how media can be a channel of peace in society.
"We try to motivate people to realize their potential and find their passion so that they can become the best that they can be, and in turn do something not just for themselves but also for the greater good,” she said.  “In a conflict, the media doesn’t take sides. But it must always make a stand. We must always stand for fairness, understanding, respect for human rights and a peaceful resolution.”
Charo, who contributed to the rise of the Kapamilya network as the leading media and entertainment company in the Philippines during her time as president, continues to give the company recognition not only for their body of work, but for how the work is done with her new award.  She joins the list of Rotary Peace Awardees like former president Fidel V. Ramos (2000) the late Jaime Cardinal Sin (2001), ABS-CBN Lingkod Kapamilya Foundation Inc. chairperson Gina Lopez (2003), the late Fr. James Reuter, SJ (2004), Tony Meloto of Gawad Kalinga (2008), former senator and Philippine Red Cross chairman Dick Gordon (2012), and Ombudsman Conchita Carpio Morales (2015).
The annual Rotary Peace Award was instituted by the Makati Rotary Clubs led by the Rotary Club of Makati San Lorenzo in 1999 to give recognition to persons who embody Rotary’s ideals of peace, fellowship, and world understanding, whose actions and advocacies promote peace and international understanding through their selfless service to humanity.
The Rotary praised Charo for her "achievements as a global media leader" that has inspired the group to recognize media as a "powerful and influential tool for peace building."  She is the first media executive to be conferred with the distinct honor.
“I hope that the men and women of the company, and the country show empathy to promote peace and compassion for a better place to live in,” Charo added in an interview, where she also shared how she relishes the chance to mentor young blood that will help the Kapamilya network.
In 2014, Charo bagged three international honors for her outstanding leadership and accomplishments as the president and CEO of ABS-CBN. She won the Gold Stevie Award in the Female Executive of the Year in Asia, Australia, or New Zealand category at the prestigious Stevie Awards for Women in Business; the Gold Stevie Award for the Woman of the Year category for all Asia-Pacific nations (except Australia and South Korea) at the 2014 Asia-Pacific Stevie Awards; and was named Asian Media Woman of the Year by ContentAsia, a premier information resource that covers the entertainment media industry across Asia-Pacific region. Before her retirement, Charo was also named chair of the International Emmys in 2015 and honored with the Outstanding Paulinian Alumna, among other awards.
ABS-CBN Corporation is the Philippines’ leading media and entertainment organization. It is primarily involved in television and radio broadcasting, as well as in the production of television and radio programming for domestic and international audiences and other related businesses. The company also owns the leading cinema and music production and distribution outfits in the country. It brings its content to worldwide audiences via cable, satellite, online and mobile.