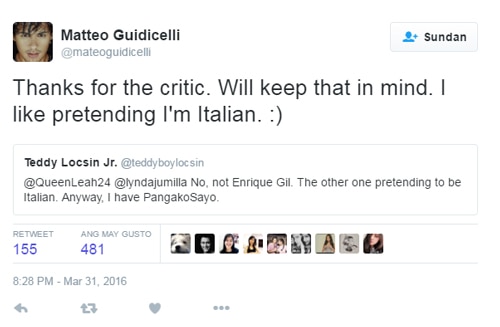 The incident started after Locsin commented on ABS-CBN reporter Lynda Jumilia’s tweet saying that he dislikes another actor who is “pretending to be Italian” on the primetime serye starring Liza Soberano and Enrique Gil.

Even though a lot criticized Locsin for the comment, Guidicelli kept his cool all through out. At one point, even the show’s writer Mark Angos joined the fray and poked fun of Locsin’s comment while alluding to the latter’s recent remark about Tagalog being a “useless tongue for debate.” In the end, Locsin himself apologized to Guidicielli for his comment.