Does Arci Muñoz's boyfriend get jealous because of her leading men? 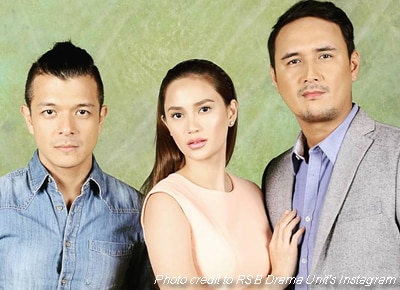 Arci Muñoz is still overwhelmed by the fact that she is set to star once again in a new Kapamilya teleserye. The actress will topbill Never Ever Say Goodbye with Jericho Rosales. "I feel so blessed and I'm really thankful. I really don't know what to expect but I'm just really giving it my all as usual," she said in an interview at the look test session of the show.
With Jericho as her leading man, Arci admitted that she feels pressured but at the same time she is ecstatic to be working with him for the first time. "Of course there is always going to be that, may pressure talaga and siyempre medyo tensyonada, ngangapa pa rin ulit, kasi matagal akong nagpahinga pero I'm really, really excited to work with them. Maganda kasi bukod sa napakaganda ng istorya, maganda 'yung location and magagaling na artista 'yung mga kasama ko so pressured talaga ako," she stated.
Arci will also work with John Estrada. With such experienced and passionate actors, Arci remarked that it actually inspires her to work even harder for the show. "It's a good thing because it really inspires me to push even harder sa ginagawa ko so talagang inspirasyon sila na mag-pursige. Kailangan ko rin talagang galingan and siyempre pag-kasama mo binigay niya talaga para sa proyektop sino naman ako para hindi magbigay nong part ko basta I'm just going to do my best."
The actress said that she has watched Jericho's shows and movies before. "He's really good and you know the depth in his acting and everything and all of his projects before, malalim siya umarte so siyempre challenge talaga sa akin na masabayan 'yun."
Arci is in a relationship with Bones Frankenstein, lead vocalist of the band Mr. Bones and the Boneyard Circus. With Arci's hectic schedule, has time been an issue to their relationship?  "That's why parang we make sure naman na... there's assurance naman po so ayon eh parang kung mahal ka naman ng tao you'll be happy talaga kung ano 'yung narating niya, kung nasaan man siya, kung ano man ang ginagawa niya, what will make him or her happy,'" she said.
With her having some sexy scenes in her projects, what is her boyfriend's reaction to it? "Sometimes I have to [explain] pero just to avoid any argument hindi na lang siya nanood." When asked if her boyfriend gets jealous about her leading men, she responded, "Yun na nga parang ina-avoid niya na lang din manood pero he knows naman, he trusts me. 'Yun naman ang importante."
Celebrity