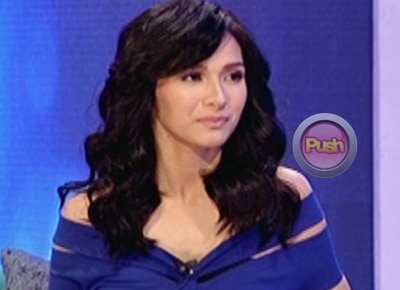 On Tonight with Boy Abunda, Jennelyn Mercado admitted she’s a fan of co-star John Lloyd Cruz. “Yes. Big fan,” said the actress.  In fact, she was already a big fan of Lloydie when she did a bit part and did some scenes with the actor in the 2002 teleserye Kay Tagal Kang Hinintay.
Jennylyn revealed what she felt while she was doing scenes with John Lloyd. “Kinakabahan ako niyan wala akong nararamdaman kundi kaba lang, saka kilig…. May kilig on the side “ The actress shared she also had a kissing scene with John Lloyd.
Now, Jennylyn is John Lloyd’s leading lady in the movie Just the Three of Us. Her character’s journey though is no longer new to Jennylyn. “Kasi nangyari yan sa akin e… nung nalaman ko na buntis ako. Sabi ko, a wala akong ibang pwedeng puntahan. Magulang ko lang talaga.”
She said of the experience, “Nakakatakot hindi ko alam kung paano ko gagawin mag-isa.”
Asked how she told her mom, she said, “Kasi hindi na ako nagsalita e. Nung nakita na ako ng nanay ko sabi niya buntis ka no? Sabi ko opo. Tapos umiyak na ako.”
Jennelyn, who has won several best actress awards, said she looks at the story when she’s picking out a project. The actors and the director she’s going to work with is not a consideration.
She has already worked with some of the best actors in the country such as Jericho Rosales, Paulo Avelino, and John Lloyd among others. Asked who she wants to work with next, she said, “Piolo Pascual.” She was also asked a hypothetical question, that if she were single, would she fall for John Lloyd? Jennelyn says, “sino naman hindi mapu-fall hindi ba?”
On the segment Fast Talk, Jennylyn said the best Kapamilya actress for her is Sarah Geronimo. The sexiest piece of clothing she owns is a “thong,” and the best place for making love is the, “bedroom.”
Celebrity