Sam Milby denies he does not like dating beauty queens. 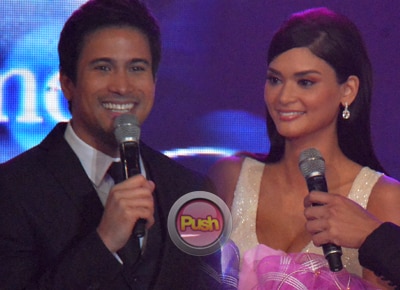 In the extended run of the hit afternoon series Doble Kara, Sam Milby’s character Seb finally ends up marrying good twin Cara. The next season of the show which begins in May has them starting a family together with a new set of challenges along the way.
When it comes to his personal life, Sam admitted he does not want to share any details. The Kapamilya actor is rumored to be dating a Japanese-British blogger. "Yung mga experiences ko dati na sinasabi ko agad about my personal life and then sometimes it doesn’t work out, wala. Normally it doesn’t work out that way. I want to share when it’s the right time. If people want to think that I’m in a relationship or not in a relationship, that’s fine. I’ve been keeping that part of my life very personal and ayaw ko pang i-share, yun lang. Wala, ayaw ko lang i-share. In the future naman I’ll share,” he explains.
Another personality he is rumored to be dating is MJ Lastimosa which Sam denied. "Hindi po. Magkaibigan lang kami and I happen to see her ilang beses kasi she’s friends din with John Prats and Isabel so nagkikita kami dun. Pero in terms of nag-ha-hang out kami, friends lang, acquiantance so yun,” he admitted.
With Pia Wurtzbach being vocal about her crush on him, Sam shared why he and the reigning Miss Universe never really dated. "Hindi po. Well parehas kaming may relasyon nung noon pa. Nakilala ko siya noon hindi dahil sa showbiz. The thing is, bilang kaibigan niya and I’ve known her for such a long time, I find it very flattering na vocal siya you know sa Fast Talk with Boy Abunda. I’m very flattered. Si Pia napakaganda, she’s a very genuine na tao. But ayoko naman sabihin na dahil Miss U na siya tapos liligawan ko siya. Hindi dapat ganun eh. if I want to go for her it would be taos puso hindi dahilparang dahil lang Miss Universe siya. Because I’ve known her for a long time. Dahil may guilty conscience din ako,” he said.
With so many pretty girls being linked to him, the Doble Kara star says it’s not true he doesn’t like to go for beauty queens. "Hindi naman sa ganun. It just never happened that way and then yun kay Pia, I’ve known her for such a long time. If ever it would be a good foundation kasi we have a good friendship. We still keep in touch. We’ve always had a good friendship. Merong mga times na hindi kami masyado nag-uusap but we used to be quite close naman before,” he added.
Celebrity