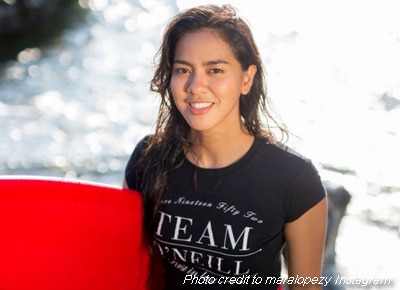 As part of one of the five entries in the main competition category of this year’s Sinag Maynila film festival, Mara Lopez said that her Jay Altarejos film TPO or Temporary Protection Order deals with a very sensitive topic. "It’s good to be part of another film fest. There’s going to be a lot going on. Well I think it’s okay that it’s a controversial topic. I definitely think that it’s a story that is worth being told and I know that the topic is heavy but just because it’s heavy doesn’t mean that we have to turn a blind eye to the issue di ba? Because it’s a real social issue that needs to be not exposed because people already know about it but it’s a story that needs to be told,” she told Push.com.ph during the Sinag Maynila opening ceremony held last April 21 at the Samsung Hall of SM Aura in Taguig.

Although she has never experienced being abused, Mara said it is an issue that is close to her heart. "I have never been battered but I have been emotionally abused as a heartbreak. Everyone asks me saan ako kumukuha ng hugot pagdating dun sa character and everything. My mom’s advocacy has always been Gabriela so marami silang sinu-support na abused women. Personally naman I have friends who are close to my heart who have been abused as a child so the issue is not new to me. I believe that a lot of people don’t want to tackle it because it’s uncomfortable but for me just because it’s uncomfortable doesn’t mean we don’t have to talk about it or see it,” she explained.

The TPO actress said she cannot blame battered women for not always taking legal action against their spouses. "I have never been in that situation so I honestly can’t say what I would do if I was in that situation. Siyempre ngayon sasabihin ko, ‘No, iiwan ko kagad yung asawa ko!’ kaya lang who knows what the people who are abused really go through? Kasi a lot of them, they actually protect the people who abuse them and they’re in denial. And you know what, I don’t blame them because when you’re in that situation you’re very much in a rollercoaster ride emotionally and physically. For me, hindi ko talaga alam gagawin ko eh in that situation,” she admitted.

After her guest stint on the Primetime Bida series The Story of Us, Mara said she has no regrets after plans to shorten her role (she was originally slated to play Xian’s childhood friend who was in love with him). "It was a one week guest role. I know iba dapat yung role before but I guess things change but I was so happy that I was able to be part of it even if it was just a one-week role. Naging masaya naman ako. Naging kami ni Rodjun Cruz dun and maganda rin yung social issue dun kasi I played his wife pero yung past niya bumabalik. Meron kasi siyang same sex lover who was played by Eric Quizon,” she said. In the show, Mara gave birth to Rodjun’s Cruz’s child, which she said got her good feedback. "Everyone said I did really well. Realistic daw eh. Thank you direk. I have worked with direk Will Fredo and direk Richard Somes and it’s good to work with these amazing directors,” she added.

While promoting TPO, Mara has been busy with hosting duties for her other projects. "So right now I’m working on Gameplan which is my new show now. It’s a web series so you can watch it on Gameplan.tv and I’m working on something now that I can’t say yet but by June we’re going to release it. It’s an environmental show and definitely something that I’m very passionate about. You’ll see me doing a lot of things here,” she said.

The 2nd Sinag Maynila Film Festival will run from April 21 to 26 at select SM Cinemas. For the complete screening schedule, log on to www.sinagmaynilafilmfestival.com. Other films include Expressway by Ato Bautista, Lila by Gino M. Santos, Dyamper by Mes De Guzman and MRS. by Adolf Alix Jr.