The cast of Dolce Amore are set to bring the kilig to fans abroad. 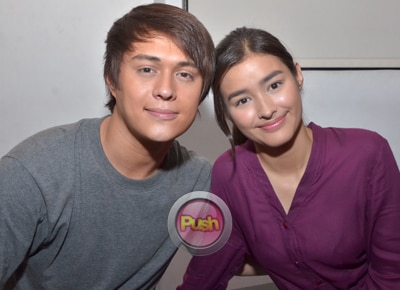 Dolce Amore stars Enrique Gil and Liza Soberano announced on Thursday, April 21, that their show will have a world tour starting this June.
Bound for Europe, the Kapamilya love team said that their world tour will kick off locally at the Lapu-Lapu Shrine in Luneta Park, Manila on May 1. The cast of the primetime drama series will then fly to Yorkshire, England on June 11; to Paris, France and Rome, Italy on June 12; and to Dusseldorf, Germany on June 19.
Considering that another Kapamilya love team, James Reid and Nadine Lustre (collectively addressed as JaDine) also had a world tour which became successful, does LizQuen feel the pressure to be as well-received?
Clarifying that JaDine’s world tour was a concert and was not affiliated with their former show On The Wings of Love, Liza said that their show would like to give back to their overseas Filipino worker fans. “Siyempre this show was made in Italy so most of our viewers talaga OFWs and we just want to get closer to our fans in the other countries,” she said.
Meanwhile, Enrique, who congratulated JaDine on the success of their world tour, said that it is good that their show reaches out to fans worldwide to show their appreciation, adding that anywhere they tour, they feel at home because of the fans.
Dolce Amore’s The Destiny World Tour
Yorkshire, England
June 11
Venue: The Racecourse, Boroughbridge Road Ripon, North Yorkshire, United Kingdom
Paris, France
June 12
Venue: Stade La Muette, 6 Blvd. Lannes, 75016, Paris France
Note: The show will start at 12 PM
Rome, Italy
June 12
Venue: Parco Delle Valli Via Conca D’Oro, Rome, Italy
Dusseldorf, Germany
June 19
Venue: Mitsubishi Electric Halle, Siegburger St. 15, Dusseldorf, Germany
For more details about The Destiny World Tour, go to emea.kapamilya.com.
Celebrity