EXCLUSIVE: Mara Lopez to compete in 2016 World Championships of jiu-jitsu

Mara Lopez talks about her love for her new sport, jiu-jitsu. 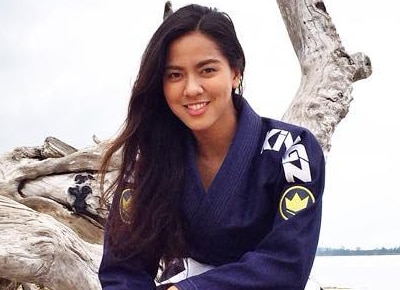 In an exclusive interview with PUSH.com.ph , actress Mara Lopez talked about her love for her latest sport, Brazilian jiu-jitsu, in which she will be competing in this year’s World Championships.
“I’m going to compete actually in the biggest tournament in the world on June sa San Diego so I really hope that people will support my campaign. It’s called 2016 World Championships so if they want to support my campaign, they should check out makeachamp.com/marayokohama,” she said.
When asked what inspired her to try the martial arts, the independent film actress said that it was actor Sid Lucero who introduced it to her. “A friend, si Sid Lucero, he invited me tapos na-addict na talaga ako.”
Mara, who is also known for her passion for surfing, added, “It’s a great feeling to be part of a team and it’s really good for fitness. It’s also very challenging as an athlete eh because it’s a very technical sport. I mean it’s still growing here in the Philippines but a lot of surfers also in Brazil and America, they do surfing and jiu-jitsu and to me, I don’t really have a sport in the city kasi nga di ba, ‘yung sport ko talaga sa dagat? And when I found jiu-jitsu, wow, meron na akong (parang) surfing sa city.”
Speaking of surfing, she earlier said that she considers herself a free surfer. “I guess I’ll consider myself a free surfer. I don’t really compete when it comes to surfing but I do compete with jiu-jitsu. For me, surfing is always going to be a part of my life and as much as I can, I will surf ‘pag may alon and surfing for me, I can’t do in the city,” she said.
Currently, Mara and her teammates which include actors Rocco Nacino, Geoff Eigenmann, and Sid Lucero are preparing for the international competition. “We’re all part of this really amazing team called Atos. So yeah, we’re all supporting each other with our sport so it feels good,” she said.
Main Photo credit to maralopezy IG
Celebrity