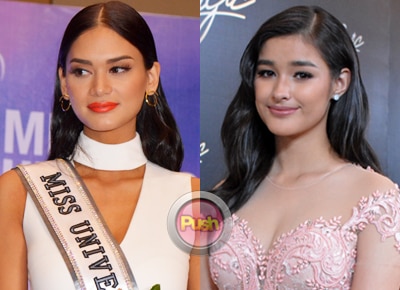 A few months after mentioning Liza Soberano’s name as a celebrity who could potentially follow her footsteps, Miss Universe 2015 Pia Wurtzbach finally explained why she was her choice.
Pia named the Dolce Amore star as her potential successor when a fan asked her on Twitter back in January.
“When I was asked at that time it was very quick. On the top of my head is commercial beauty na papasang Pilipina pa rin, siya ang naisip ko,” said Pia during a roundtable interview organized by Binibining Pilipinas.
The young actress, according to Pia, is “maganda talaga.”
Since Liza just turned 18 a few months ago, Pia believes that she still has time to prepare for it, if she really wants to pursue it.
“She’s young [and] she can still train [as a beauty queen],” she said.
Liza for her part claimed in a past interview that she has no plans of joining a beauty pageant as of the moment. But she considers being named by Pia as an honor and a compliment.
She added that, “There could be many other celebrities that can be a Miss Universe. Why not? Baka nga lang kailangan na nilang i-give up ang mga careers nila dito. ‘Yun nga lang sikat na sila.”
Pia is currently in the country to pass on her crown during this Sunday’s Binibining Pilipinas Coronation Night at the Smart Araneta Coliseum.
While she admitted that there are those who caught her eye during the pre-pageant competition where she served as a judge, Pia noticed something quite interesting.
“I also noticed na ang dami ko ng kamukha and ang dami ng gumagawa nung lingon ko ah,” she said. “[There’s] nothing wrong with that. It’s very good. It’s interesting to see when I used to do it in my living room and now everybody’s doing it onstage. So funny.”
According to her there are a number of “winnable” candidates during this year’s roster.
However, she stressed that although the Philippines is a force to reckon with in the Miss Universe pageant, the candidates must not rest easy on their laurels.
“I’m excited to see the question and answer kasi ang question and answer ng Miss Universe ngayon dalawang beses na. And they might even change that kasi alam na natin ang formula ngayon,” she said.
Celebrity