Richard Yap talks about working with John Lloyd Cruz in the upcoming movie ‘Just The 3 of Us.’ 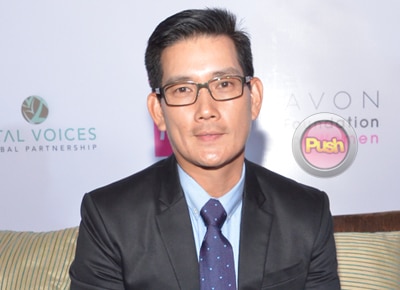 Richard Yap said that he is honored to be chosen as Avon Philippines' Speak Out Against Domestic Violence Ambassador. "I think this is something very worthwhile that all of us should take a hand in showing people that domestic violence is not okay," he said in an interview at Avon Foundation’s press conference at the Diamond Hotel Manila last April 12, 2016.
Being part of such a cause, Richard said that his wife is truly proud of him. "Of course she was very happy about it. We need to help to get this message out to more men so she was very happy that I am part of something as worthwhile as this one."
As a celebrity, Richard believes that he has great venues to help spread the word about the cause. "Yes I think that as an actor I think we have more chances to talk to aside from the people we know, we have other venues like the media, we can spread our message not only though personal ways but though the avenues that are available to us whether to be on print or social media or TV."
Besides being an ambassador, Richard is also currently busy filming the upcoming movie Just The 3 of Us. “I am doing a movie with John Lloyd Cruz and Jennylyn Mercado which is the Just The 3 of Us.  It's a learning experience. We all know that John Lloyd is the king of movies so it’s a pleasure to be able to work with him and learn from him also, Jennylyn we haven’t had any scenes together so I did not have the chance to meet her."
Is there any pressure on his part working with John Lloyd? "Of course, we know that he is one of the well known drama actors in the Philippines. There’s a little pressure to be working with him and doing a scene with him but he and our director Cathy Garcia-Molina were very supportive so it was okay."
Richard remarked that as an actor, there is still so much to learn and to showcase to the viewers. "I think that as an actor there's always something new to learn so you can never say that I know everything already. Every experience, every show is a learning experience and I am looking forward to the next few years to show people that there are still many things that I can do.”
Celebrity