Here are the 5 highlights of Kim Chiu’s 10th anniversary concert. 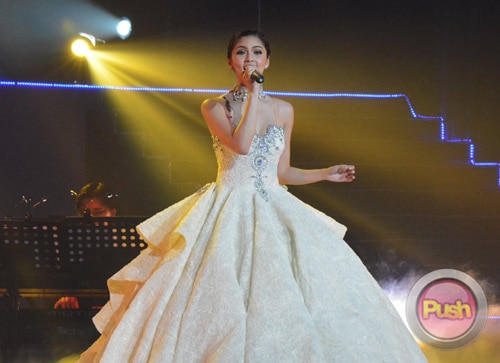 Here are the five highlights of the night.
1. An overwhelmed Kim became emotional several times

Feeling overwhelmed by the support of her fans and loved ones, Kim first became emotional after her opening number.
She also became so emotional when she sang “Peng You” that she stopped singing for a while before continuing.
Thanking her fans, family, bosses, and friends who were present, she said, “I know 10 years is really difficult para suportahan ako, ang daming bago, ang daming dumarating. But still, nandito pa rin kayo (mula) 2006, 2016 na.
“Hindi niyo alam kung gaano niyo ko pinasaya. Espesyal pala ako para sa inyo, para pumunta kayo dito and magbayad kayo. Pero siyempre, sobra akong natutuwa. Kung may salita pa pong sosobra sa salitang salamat, ‘yun po ang sasabihin ko para sa inyong lahat,” she added.
Recalling how she surpassed “dark roads” in her life because her supporters serve as her inspiration, she dedicated the Jessie J song, “Flashlight” to them.
As the concert concluded, a teary-eyed Kim told everyone, “Thank you for staying with me and loving me… Itong lahat ng ito, I feel very special I (found) my place in your heart. Mula po sa aking puso, maraming salamat for supporting me in these 10 years.”
2. Kim belted out Aegis’s ‘Luha’ alongside singing divas Angeline Quinto and Morissette Among Kim’s special guests were singers Angeline Quinto who sang “Somewhere Over The Rainbow” and Morissette who performed ‘”Di Mapaliwanag.” Later, the Chinita Princess sang Aegis’s “Luha” and was joined by the two as they hit the high notes of the OPM classic.
3. Kim did stand-up comedy with Kakai Bautista, Tart Carlos, Lassie, and MC Although it took her three tries since she was nervous, Kim impressed the audience with her skills in playing the drums. “Pinaghandaan ko po talaga ‘yun para sa gabing ito,” she told members of the press.
While playing the drums, the audience got surprised when actor Piolo Pascual appeared onstage and sang The Eraserheads’ “Alapaap.”
5. Xian Lim to Kim: I love you so much Singing while emerging from the audience area, Xian Lim  joined Kim onstage for a performance of Charlie Puth’s “One Call Away.” The two also shared a dance onstage.
Saying that he is very happy to have met Kim, he said that although many people love her, he just wanted to say, “I love you so much.”
Celebrity