Gerald Anderson reacts to ‘Gerald is back!’ comments 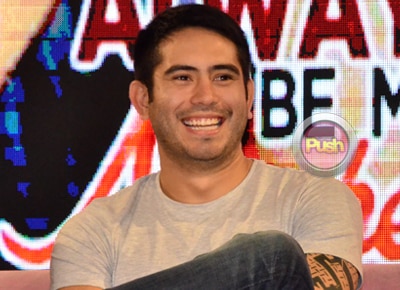 A few weeks since his hit movie Always Be My Maybe was released, positive feedback about Gerald Anderson’s performance, as well as those of his leading lady Arci Muñoz’s, continued to circulate on social media.
Some even declared that “Gerald is back!” after seeing the Dan Villegas flick.
While he remained in high spirits over the warm reception of the movie, Gerald, during the launch of his non-profit volunteer organization Gerald Anderson Foundation (GAF) K9 Search and Rescue on his birthday, addressed how he feels about such comments.
“Oh wow, hindi naman ako nawala, nandito lang naman ako,” he started.
The actor, who turned 27 on March 7, claimed that his “reinvention” of sorts in the rom-com was brought about by the fact that he is not getting any younger.
“Ganon talaga ang buhay eh. That’s the fun part, ‘yun ang exciting. You always have to reinvent yourself. Kasi kung hindi ako nagbabago as an artist, as an actor, ang boring naman natin yata niyan. Hindi eh, matanda na rin ako, 27 na ako today so hindi naman pwedeng kung sino ako dati, ganon pa rin ako ngayon,” said the Pinoy Big Brother Teen Edition alumni.
Does he see himself doing another movie with Arci?
“Siguro kung hindi kami bibigyan ulit ng movie ng Star [Cinema] ako na lang ang magpo-produce,” he quipped, stressing that he meant it.
Meanwhile, even though he has launched his very own foundation, Gerald stressed that he would remain active in showbiz despite the rigorous training that he as well as their team’s dogs have to go through.
“That’s why they are here [my teammates]. Sabi nga ni Jim [Hackett] sa akin, ‘We’ll do the dirty work, you just stay popular,’” he said about his current GAF team composed of his brothers Randy and Ken as well as ex-military K9 trainers.
“Ako naman kasi artista parin, kaya ko naman nagagawa lahat ito, on this level, because may trabaho ako dahil nga artista ako. Pero kapag nagte-traning kami, I want to do this not as a celebrity but as a team member kasi sobrang important,” he explained.
But Gerald highlighted that “I’m not coming here as a celebrity, I’m coming here as someone who would be helping and ‘yun nagkataon lang na nagagamit ang pangalan ko and I am a celebrity. Kaya namang ipagsama ‘yun. Kapag pinagsama mo ng tama, it could go so many places.”
The Fil-American star stressed that he has chosen to come up with a K9 Search and Rescue team which aims to train dogs to save lives out of his and his family’s fondness for dogs. In fact, his very own German Shepherd, Fredo and his brother’s Labrador Retriever, Koda, were the first dogs to join the team.
Gerald has been so hands-on with his foundation that he claimed in a recent interview that had he not been a celebrity, he would probably do something like what his foundation hopes to achieve.
Celebrity