Jake Cuenca on seeing his ex-girlfriend in New York: ‘All I can do is hope’

Jake Cuenca talks about going abroad for three weeks before his next soap. 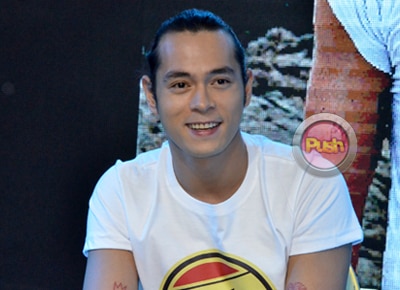 Currently on his three-week trip to the US, Jake Cuenca said he is still looking for the right acting classes to join during his break. "Pinagbigyan ako ng ABS-CBN na magbakasyon ng konti after almost two years of filming Pasion de Amor so mag-nu-New York ako. Mag-aaral ako ng konti but habang nasa New York ako pinangako ko sa ABS-CBN, sa Dreamscape, mag-aaral ako for this new role na ibibigay. At hindi ko pa puwede i-discuss kasi hindi pa naka-plantsa eh. Parang may pitching pa lang. And then may indie film ako with Quark Henares. It’s my first time to do a transvestite role. That’s why rin hindi ako nagpapagupit. Tapos may movie ako with the Pasion de Amor boys, the three of us, with Regal films so it’s going to be busy, medyo busy pagbalik ko,” he explained.
Jake said he really wants to take a more intensive course this time for acting and he has a plan if ever he cannot enroll in the one he wants. "Halos 22 days ako dun. Gusto ko sana umabot for school pero nag-extend ng nag-extend yung pag-alis ko hindi na ako umabot dun sa intensive na gusto ko gawin so mag-wo-workshop na lang ako with some of the teachers in my school. Pupunta ako sa school ko sa Lee Strasburg tapos itatanong ko if I can join in the class and watch on how to facilitate. But definitely parang hindi ako yung super bakasyon na bakasyon na naka-relax and everything. Manunuod ako ng Broadway plays, manunuod ako ng kung anu-ano para ma-inspire at ma-rejuvenate, at ma-entice ulit to doing soaps ulit. At saka alam niyo naman kung gaano kadugo in doing soap operas. So feeling ko importante din itong pahinga na ito at the same time hindi ako bakasyon na bakasyon. I’m being prepared for my next role,” he admitted.
Even with his American ex-girlfriend and him in the same country, Jake said it’s not that simple to make plans to see her again. "Things just haven’t been working out that simple. Siyempre she’s in New York. Sana magkita kami pero so far parang ang hirap eh the long distance relationship. I think medyo na-overwhelm din sya with the whole celebrity thing. It just didn’t work out. To me, she’s the only girl in my heart right now and masakit. Sinasabi ko naman to my friends and I think this time I feel really bad about it. I wish I had worked for it a little bit more, I wish I had more of a fighting chance. Mahirap kasi malayo kami sa isa’t isa eh. But she’s the one to me and kung di man kami magkabalikan, she’ll always be here kasi for me that was the best relationship,” he said.
The 29-year-old actor admitted that living in different countries was a big reason why they decided to part ways late last year. "May dreams and aspirations siya at siguro nagustuhan niya ako kasi pinakita ko sa kanya na kaya mong abutin lahat yan, you just have to believe in yourself. May [pamilya siya and may dreams siya and I’m the type of person who follows my dreams and gets it. Pag ako sinabi kong gagawin ko, gagawin ko talaga so yun yung ininstill ko sa kanya, yun yung pinakita ko sa kanya na kaya mong makamit yan. Naisip ko kaya kong balansehin pabalik balik but kasi nga minsan sa hindi inaasahan, kunwari sa Pasion de Amor na-extend ng na-extend so yung plano mo na pagpunta dun medyo na-delay ng na-delay ng na-delay so yung mga problema na dapat maayos na-delay ng na-delay din ang pag-aayos. Ayoko masyado i-detalye kasi one thing amazing about that relationship was that it wasn’t like a showbiz relationship na sobrang binuklat namin or linantad namin yung mga issues namin or mga problema namin. That’s something that I want to keep at saka kung sakaling magkabalikan man, I think she’d appreciate me not talking about a lot of things,” he added.
Going back to school and focusing on his career is top of mind for the Kapamilya actor who admitted he is not totally over his ex. "Right now all I can do is hope and I’m still hoping na one day we could cross paths and continue that relationship but I said I’d like to respect that space. Aside from that sa New York I have a meeting with some people about work as well so hindi naman ako pupunta doon solely because I want to meet her but it’s also for me. Parang the best thing you can do, yung pinaka-puwede mong gawin after a breakup is do what’s best for you and then just hope for the best when it comes to the relationship. Pleading, begging, texting one hundred times and calling her one hundred times is not sexy. I’ve never heard a girl take someone back that way so I’d like to respect her space,” he said.
Celebrity