Will Paul Soriano follow Lav Diaz’s footsteps when it comes to filmmaking? 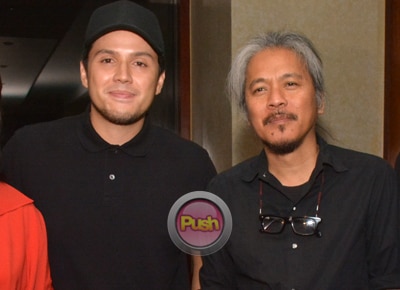 Hele Sa Hiwagang Hapis producer Paul Soriano had nothing but praises for the movie’s director Lav Diaz.
As a director himself, Paul described Lav who taught him “not to take life seriously” as a “humble, nice guy.”
“Lav is just so cool and so calm… I remember he was shooting a scene and then it starts raining in the middle of the scene so I thought we’re going to pack everything,” he shared, adding that Lav just continued shooting, saying that it rains in real life. “He’s very organic and if there’s a lesson, the number one lesson that I took from producing this film was Lav taught me not to take life seriously,” he said.
When asked if he is willing to make a movie like how Lav does, Paul said that he has his own style of directing. “I don’t think I can. I’m actually shooting a film now and it’s just my style to shoot the way I shoot our films. I am definitely not going to replicate a Lav Diaz. I won’t even try to do that… I think every filmmaker, every director wants to have their own voice. Yes, we are inspired by filmmakers, we are inspired by films… But no, I don’t think I could tell a story the way Lav tells it,” he said.
Paul said, “I need to move the camera, I need to engage, that’s just my style and I will just leave it to Lav with this kind of cinema. That’s his expertise and I won’t try to replicate it at all.”
Paul directed films like Kid Kulafu (2015), Transit (2013) and Thelma (2011), among others.
Celebrity