EXCLUSIVE: Cherie Gil on working with Lizquen: ‘They take care of each other’

Cherie Gil plays a tikbalang for the first time on the big screen. 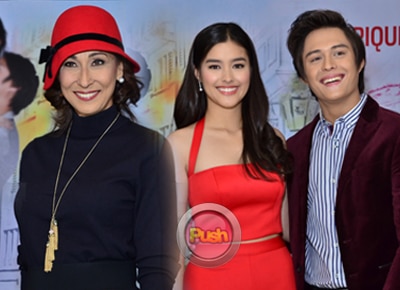 As part of the Lav Diaz-film Hele sa Hiwagang Hapis (A Lullabye to the Sorrowful Mystery), Cherie Gil said she is happy that the movie will be shown in selected Metro Manila theaters starting March 26. The veteran actress said her family has not yet gotten the chance to watch her portray a mythological creature called the “tikbalang.” "No they haven’t watched it yet but the moment I announced it to them they were in New York and Lav Diaz is big in New York City so they’re going to show his movie there. The moment I announced we won (the Silver Bear award at Berlinale) they said, ‘Mommy we want to watch!’ I said, ‘Go ahead and see it in New York. It’s eight hours.’ She said, ‘OMG!’ But then again she and her friends are excited for it,” she shared.
In a recent interview with PUSH, Gabby Concepcion’s daughter Garie admitted that Cherie was one of her idols when it comes to acting. The 52-year-old performer admits she is now even more inspired to work. "See my goosebumps? I’m speechless. I only get goosebumps when I hear that. It’s more than flattery. I think it makes all the years I spent in the business all worth it. And all the love I put into my craft and my work is really worth it so I’m happy,” she said
Busy with tapings for the Primetime Bida series Dolce Amore, Cherie revealed she might even have work during the Holy Week. The Kapamilya actress said she is just as excited as the fans are on how the story of Tenten (played by Enrique Gil) and Serena (Liza Soberano) will play out. "Frankly, I wish I had an answer because I still don’t know where the story will go. The good thing about the show is that all of us are kept surprised also. So we’re neck to neck now. We're taping. So now it’s still the kilig moments. I’m enjoying myself. It’s nice to watch Liza and Enrique together,” she admitted.
Cherie admitted that she noticed that the popular Kapamilya love team is just as sweet as they are off-camera when they’re not acting. "They take care of each other very well. There seems to be a very innocent and caring love that they have for each other,” she said.
Celebrity