Is Darren Espanto open to working with Cassy Legaspi? 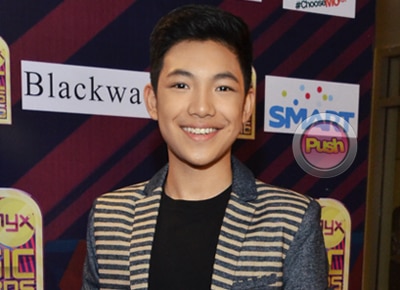 Young singer Darren Espanto said that he is currently balancing his studies and his career in his busy schedule.
During an interview with the press on the red carpet of the recently-concluded MYX Music Awards where Darren won Favorite Male Artist and Favorite MYX Celebrity VJ, he said, "Right now, I'm really focused on studying as well din po pero binabalanse rin po namin." He also revealed he was finishing his second album, as well as working on other projects and endorsements.
Apart from singing, Darren was also asked about possible acting projects to which he revealed receiving an offer to join the Metro Manila Film Festival last year. However, his schedule was packed by then so it did not push through.
But Darren said he would be okay should he be offered another chance to pursue acting.
When asked who he wants to work with, he mentioned his The Voice of the Philippines Kids coach Sarah Geronimo. "Gusto ko rin pong makatrabaho si ate Sarah, yung coach ko po."
How about his crush, Carmina Villaroel and Zoren Legaspi's daughter Cassy Legaspi?
"Pwede po. 'Yung Legaspi twins, they're very cool people and fun to chat with," he answered, sharing that he communicates with them through a group chat.
When asked if it's okay with Carmina and Zoren that they formed a group chat, Darren laughed and said, "Okay naman po. Actually pinost po ni Sir Zoren 'yung mga pictures namin."
LOOK: Darren Espanto finally meets Cassy Legaspi
Celebrity