EXCLUSIVE: Gwen Zamora on marrying Jeremy Marquez: ‘He has treated me like a queen’

Gwen Zamora says she is willing to say goodbye to showbiz for love. 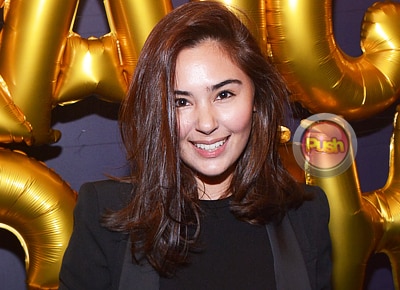 With her comedy film Straight to the Heart currently part of the CineFilipino film festival which runs in select theaters in Metro Manila until March 22, Gwen Zamora said she had fun working with her good friend and first time director David Fabros. "It was my first time working with him as a director but then we’ve been good friends for a couple of years now. We were just talking about this movie about two or three years ago. Like out of the blue we were just having dinner. I met David Fabros in GMA because he worked in GMA for a brief time and then we bonded, we clicked so we became friends. He was really a breeze to work with. One because the time we spent working. You know how there’s this whole time issue while working now? With him, by midnight he’s done na. He doesn’t like going past 12 o’clock. Parang he had a clear vision of how he wanted it and then he relayed it so well to us so it was easy for us to translate his work into acting,” she told Push.com.ph.
In the film, Gwen plays a lesbian in a relationship with Garie Concepcion (who is also making her acting debut). They shot the movie in nine days with Carlo Guevarra who also plays one of the leads. "Working with Carl was nice also. He’s super suited to the character. You could see his transition from the gay to the straight guy. It was super nice but then he did it in such a subtle way. It was my first time working with him also,” she admitted.
If there’s a lesson Gwen got from the movie about love, she said it would be this, "I believe that love doesn’t have any limits. If you love someone straight, gay, woman or man, if you love them for who they are it doesn’t matter what they are. So ayun, props to whoever finds their true love."
Apart from showbiz, the 25-year-old actress is also getting ready for her marriage to Jeremy Marquez which will be held in Bohol on December 10. Gwen shared how she knew he was the right guy for her. "You just know. You will know. Like there’s no specific way of saying how did I know he was the one. I just knew. You feel it. It’s crazy. And then you’ll feel this instant bond and then you know this is the person you can be anything you want with, you can do whatever you want and then that person will accept you for who you are which is amazing,” she shared.
With Joey Marquez’s eldest son having been involved in showbiz intrigues in the past, Gwen said she is not bothered by it. "I’m not the type of person that will take someone else’s judgment for my own judgment. So whatever I heard or read in the past that’s whatever he did in the past. Whatever he does to me from this day forward, that’s what I would judge upon and I will reflect on. And so far he has treated me like a queen so I don’t see any reason why I should be worried (laughs),” she said.
She also shared that she gets along with Jeremy’s family. "I see Winwyn at the gym. She’s cool. I like her. And then we saw tito Tsong (Joey) a few weeks ago because we went to one of his occasions. Because we’re so focused right now on Jeremy’s campaign that there’s no room for extra-curriculars,” she added.
Off-camera, Gwen said her relationship with Jeremy is very fun. "When you see us, we look kind of serious but naman if you get to know us and see us behind closed doors we’re like two little teenagers. It’s funny. We do the most weird, things (laughs),” she admitted. If her boyfriend does end up being elected vice-mayor of Paranaque, is she willing to say goodbye to showbiz? "I don’t know. We’re taking it day by day and then see whatever comes along. If there’s an opportunity for me to work, I will take it. If I’m not going to be working I’ll just be supporting him which is for me either way, a good thing,” she said.
Celebrity