Jake Cuenca after his breakup: ‘We don’t hate each other’

Jake Cuenca admits he is letting go of the best relationship in his life. 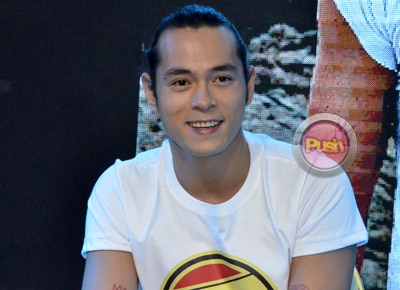 After his hit afternoon series Pasion de Amor ended, Jake Cuenca admitted his own personal relationship with American girlfriend Sarah Grace Kelly had also come to an end late last year. Jake said it was the pressure of their long-distance relationship that took its toll on them. “(The breakup) was over the phone. Yun nga malayo kami sa isa’t isa and it’s just something na siguro she had good reason to kasi ang hirap and I have to understand that she’s only 20 and para ipilit yung mga resonsiblilidad na yun sa kanya, I don’t think that was fair. We were together for one year,” he shared during his launch as Guitar Underwear’s newest endorser last March 17 at Cities Event Place in Quezon city.
Up to now, Jake said he is still in the process of accepting what happened. "Masakit and sinasabi ko naman to my friends, this time I feel really hurt about it and I wish I could’ve worked on it a little bit more. I wish I had more of a fighting chance kasi malayo kami sa isa’t isa eh. But she’s the one to me and kung hindi man kami magkabalikan she’ll always be here. Kasi to me that was the best relationship I’ve ever had,” he admitted.
The 29-year-old actor said he has not totally given up hope even if now is not the right time for them. "At this point I’m still fighting but I’m just not being the makulit ex-boyfriend. Alam niyo yun? Yung ganun. Parang lahat ng soap opera at pelikula may ganyan, yung makulit na ex-boyfriend. I just don’t want to be that. I’m respecting her space. For a 20-year-old woman, you have to respect that space. You can’t be calling her and texting her: it’s not sexy. So I’m just respecting that space. She’s really, really special to me let’s just put it that way and unlike all the relationships I’ve been in. Kita niyo naman eh that it’s so different. I’m just really cherishing that relationship, parang that was really the best that I had and sana someday we can meet halfway and continue on with the relationship but so far right now we have to do what’s best for each other,” he shared.
The new Guitar Underwear celebrity ambassador said he is thankful he and Sarah parted ways as friends. "Hindi naman siya bad breakup na nag-away. We don’t hate each other like that. It just happened. Nangyari lang talaga. Gustong gusto ko siya talaga. It just didn’t work out. Pagdating sa long-distance parang may mga problema na alam mong kaya mong ayusin kung magkaharap kayo eh pero kasi sa distansya, text at tawag parang ang daming mga bagay nagiging mas complicated. Alam naman namin yun from the very beginning but that’s something that we learned through time,” he explained.
As he leaves to study acting again in the US this month, Jake said he does not know if he will meet up with Sarah. "Honestly hindi ko alam. Sana. All I can do is hope for best but wala pang concrete (plan) na magkikita kami, walang ganun. We’re still friends but for now parang I have to respect her decisions. Hindi ko kaya pilitin yun. She’s only 20 years old. Hindi ko kayang ipilit yung ganitong klaseng buhay sa kanya. Naintindihan ko naman yung side niya kasi nung 20 ako it was really career so hindi naman ako mapilit na tao. I need to respect that so pinagdadasal ko siya every day, I wish her all the best and sana somewhere, at one point in life magkita kami ulit at magsama ulit. pero wala pang concrete ngayon eh. To be very honest all I can do right now is hope,” he said.
Celebrity