Sofia Andres is set to star with Diego Loyzaga in a new series. 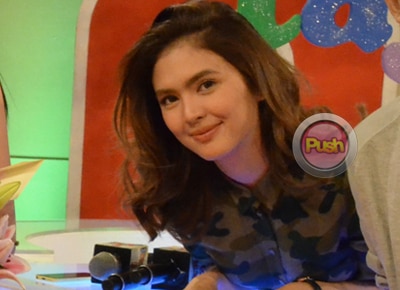 Young actress Sofia Andres gave her reaction to the alleged mauling incident involving her onscreen partner Diego Loyzaga.
Early this week, reports surfaced that Diego had allegedly beaten up brothers Wilmer Angelo and Wilmer Paolo Lopez in the parking lot of The Palace Pool Club in Taguig last Sunday, March 13. However, the young actor clarified his involvement, denying he beat up anyone and started a fight.
READ: Diego Loyzaga on parking lot altercation: ‘Wala po akong sinaktan, wala po akong sinapak’
Sofia told members of the press during the recently concluded MYX Music Awards, “I know he’s (a) very kind person. He can’t do anything like that although I didn’t know what really happened. But I think he’s strong enough to say the truth.”
When asked about what she thinks of the whole situation, Sofia said that she thinks this is just a challenge for Diego. “Challenge lang for him and to everyone also na we truly have to take care of ourselves.”
Celebrity