Bimby asks Kris: ‘Are we going to be poor?’ 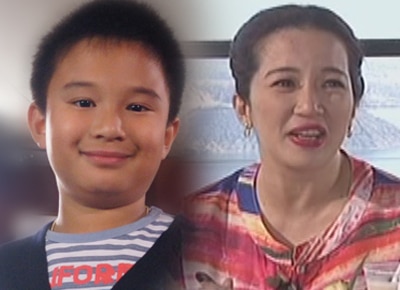 During Kris TV’s March 16 episode, Kris Aquino shared with guest Isabelle Daza and the show’s head writer Darla Sauler that she’s sad with her temporary leave of absence from showbiz.
After announcing on Instagram that she is bowing out of the limelight due to health reasons, Kris said her elder sister Ballsy Aquino-Cruz checked on her. Kris admitted to Ballsy that she had a high BP (blood pressure) at 148/99.
Her sister advised not to be sad and focus on her health and in time, she’ll feel better and be back to work sooner than she thinks.
Isabelle comforted Kris and said, “Okay lang ‘yan it’s gonna be your ano, sabbatical and it’s gonna refresh you and after that you’ll be ready to work again.”
“At least ina-acknowledge ko sa inyo na kung kayo nalulungkot, lungkot na lungkot din po ako,” Kris told the avid viewers of her show.
The Queen of All Media then shared that although she’s not okay, she’s still excited to spend time with her two sons Josh and Bimby. They are already set to go on vacation to their favorite place for three weeks. Josh is also celebrating his 21st birthday so Kris asked her eldest son where he wanted to go.
“He also got to choose, namili kami. I showed him all the possible resorts siyempre meron siyang isang pinili na sabi ko, ‘Kuys pasensiya na at that point ang mahal. Ang income ni Mama won’t be the same at that point so pwedeng dun tayo sa eto [another side of the choices], eto lang ah, dito ka lang mamili.’ So meron siyang nahanap tapos it’s as nice but 1/3rd the cost of where Josh initially wanted to go,” Kris shared.
Bimby overheard their conversation and asked his mom, “Why, are we gonna be poor?” to which Kris replied, “No! Relax it’s just that gusto kong matuto kayo.”
Bimby then offered to not go to the place he chose to celebrate his birthday so that his Kuya Josh could celebrate in the first resort he chose. Kris said, “No, yours is prepaid kasi we have that vacation club (laughs) oo [time share] nabili ko na yan before pa, [when] you’re a baby we bought that na.”
Kris TV will air its final episode on March 23.
Celebrity