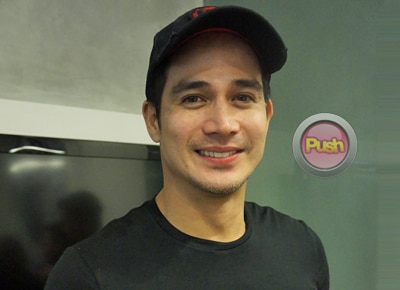 Fresh from his independent film Hele sa Hiwagang Hapis’ Silver Bear win at the 66th Berlin Film Festival, Piolo Pascual shared that he is looking into creating an independent film every year.
“If you have writers that are ahead of their time and who are brave enough to make such concept, yeah. It’s a privilege. It’s really a privilege. Kaya nga nung ginawa ko ang Hele I really insisted,” said Piolo in a recent interview with Push.com.ph and other members of the press.
The film which starred Piolo and John Lloyd Cruz was directed by acclaimed filmmaker Lav Diaz and was produced by TEN17P’s Paul Soriano.
Piolo who just returned to the country to start shooting his next film with Coleen Garcia and Dawn Zulueta titled Love Me Tomorrow, remained in high spirits after his first Berlinale experience.
"More than anything, it's giving prestige to the country. It's good because we have a presence already in a big festival," he said.
He recalled that nobody stood up during the sold-out screening of their eight-hour film at the Berlin Palast last week which was attended by festival participants, critics, spectators and the Berlinale’s jury including Hollywood stars Clive Owen and Meryl Streep.
The award’s night lasted, according to him, for an hour as the jury gave away 10 awards.
“There was no intermission, no production number. We started at 7:00 and we ended at 8:00 on the dot. It was no frills ang bilis lang everyone was given ample time for their speech kapag nanalo. It was organized,” he shared.
“It was well-accepted by the critics especially Lav. He was a superstar. He was a rockstar and we were his posse. Kami ‘yung nasa likod niya, nagpe-presscon siya, ini-interview siya and nasa likod lang kami.” he added.
Piolo stressed that it was indeed Lav’s “time to shine” during the award’s night and that he just felt good that the film was well-received because “it kind of served its purpose.”
“When the film was pitched to me I was thinking it was high time for Lav to be recognized locally because kilala siya sa Locarno [International Film Festival] and other festivals abroad and you know our generation should embrace somebody like Lav because he is edgy and he doesn’t care about what people say about his work. But when you watch it, you will have respect for him as a director, the kind of respect that people from the other countries are giving him. He deserves to get that kind of recognition here in the Philippines,” he explained.
Apart from taking home the Silver Bear, Piolo also counted meeting and having dinner with Meryl Streep as one of the highlights of his Berlinale experience.
In the end, Piolo said that they are now looking at options where to screen their film locally.
Celebrity