Meryl Streep on Lav Diaz: ‘He changed the molecule system in my body’ 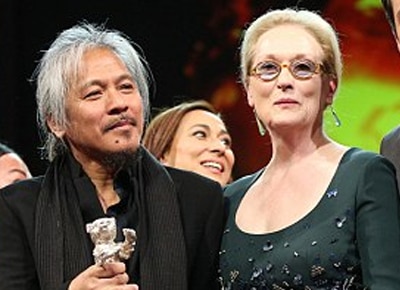 In the segment The Main Issue of Tonight with Boy Abunda, another Filipino masterpiece brought honor to the country as the movie Hele sa Hiwagang Hapis directed by Lav Diaz won the Silver Bear Alfred Bauer prize at the 66th Berlin International Film Festival.
According to host Boy Abunda, it is the first time a Filipino film got the Silver Bear award. On the official Facebook page of the movie, Hollywood actress and three-time Academy Award winner Meryl Streep, who was the chair of the jury, was quoted to have said regarding Lav Diaz: “This film. This guy. He changed the molecule system in my body.”
Hele sa Hiwagang Hapis is produced by Paul Soriano.
Mainphoto credit to dailymail.co.uk
Celebrity