James Reid on admission of relationship with Nadine Lustre: ‘It’s such a relief’ 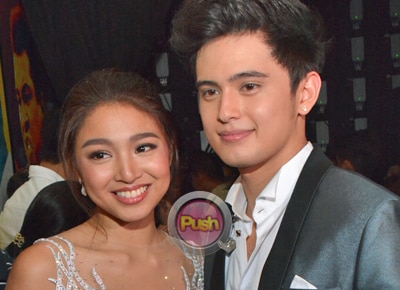 James Reid, one half of the formerly reel and now real life couple JaDine, maintains that his admission was something he did for himself and not for anyone else.
“I didn’t really do it for the fans. I did it for my own…I just wanted to do it. I expected [that they will be happy for us]. I’m happy that they are happy. I’m happy that everyone’s happy. Yesterday was really different,” he said in a report by ABS-CBN News on Sunday.
According to James, Nadine appreciated his gesture at the concert.
“She literally sat there smiling and just said, ‘Kilig ako!’” he shared.
However, while many were happy for him and Nadine Lustre’s next level relationship, there are those who are writing it off as a publicity stunt especially since their top-rating soap On The Wings of Love is set to end this week.
James refuted such claims saying that “It’s such a relief. You have no idea how relieving it is to be able to express [my feelings for her] because for me, for the longest time, I’ve had to suppress it or hide it. Now, it’s so liberating to just be able to hold her hand in public and say I love you out loud.”
True enough, James and Nadine, once again exchanged “I love you’s” twice on ASAP yesterday after much prodding from host Luis Manzano during the show and from Robi Domingo during the ASAP Chillout segment.
But the biggest question was how and when did the courtship happen?
“For me, I guess, because I am Australian, I grew up in Sydney, the way that we court girls, it’s different there. But, of course, the first person to know was her father. I asked permission from him first a while back. I tried to keep that Filipino tradition,” he said noting that he even went up to Nadine’s house.
Since revealing that they officially became a couple on February 11 after their aptly titled concert JaDine In Love, James went on to share how it all happened.
“On the 11th, we went out for dinner. I was like, ‘I bet you didn’t know I could be like this.’ She’s like, ‘Yeah, I didn’t really expect this from you.’ I said, ‘It’s different when I’m in love.’ And then she said, ‘Are you in love?’ And then I thought, you know what, right now is the right time. I told her, ‘Yes, I am.’ She knew what I was talking about,” he shared.
Celebrity