Vivian Velez on being married three times: ‘All is fair in love’

Vivian Velez shares why she accepted role in the new afternoon soap ‘Tubig at Langis.’ 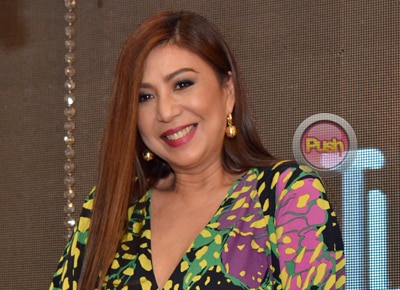 Playing the role of the Conching Villadolid on ABS-CBN’s newest afternoon soap Tubig at Langis, Vivial Velez admitted it wasn’t a hard decision to return to teleserye work after being part of the 2014 series Maria Mercedes. “I chose this because of the story. Yun ang una sa akin eh, yung priority ko is the story, the production that I'm working with and I wanted to work with direk FM Reyes. I've heard so many good things about his way of directing. I want to experience that also. Si Raymond (Barcelon) nakasama ko naman yan sa Maria Mercedes. Kami naman ni direk we're close friends. And of course the main cast. With Zanjoe (Marudo) I really wanted to work with him. Nasubaybayan ko ng konti yung kanyang career from PBB until when he became a good actor. Si Cristine (Reyes) I like her character a lot and of course si Belle (Daza) one of the most beautiful ladies in the industry right now. Put it all together, those are all the things that I considered,” she explained.
After almost two years since her last soap, Vivian admitted she has gotten pickier when it comes to choosing roles. "Namimili talaga ako kasi I do other things also and doing a TV series will really take so much of your time so sakripisyo yun sa schedules and talagang piling pili lang yung ginagawa ko,” she admitted.
The multi-awarded actress also admitted that her love life is just as colorful as her character in Tubig in Langis. Known as the “Ms. Body Beautiful” of the Philippines, Vivian also talked about walking down the aisle multiple times. "I’m three time married. Kasi hinahabol ko si Elizabeth Taylor, kulang pa ako ng apat. (laughs) Marami ngang nagsasabi na marriage what does it mean? Kasi I’ve gone through tatlo na yun but then because of that, because I believe in the institution. For me it’s an institution, it’s legal so more or less ganun so I believe in marriage. But not in terms of relationship, medyo it’s kind of deep. Ang relasyon kasi sa akin all is fair in love for as long as you face the consequences of karma or things like that. Ganun sa buhay eh, there’s no cut and dried na ito dapat. But I’ve never been married here in the Philippines by the way,” she shared.
The Tubig at Langis actress who has two sons from an Israeli ex-husband admitted she still has her share of suitors but stresses why she is definitely a one-man woman. "Meron pa rin definitely. Pero hindi ko kaya. Iisa lang talaga. Also because I’m a very jealous person so hindi ring puwedeng may kaagaw ako. Siguro temptation more for guys yun di ba? Ma marupok ang mga lalaki eh. So yun (laughs),” she said.
Celebrity