In Tune and In Love: A Quick Guide to 15 Valentine Concerts In a country best known for its love for karaoke, music, and singing per se, concerts whether by local or foreign acts are always well patronized. If there is one month wherein balladeers become incredibly in demand, it would have to be during February when almost every one is in the mood for romance.
Whether you are single, in a relationship, traditional, conservative, young or old, the Valentine’s Day concert scene definitely has something to offer you. Push.com.ph lists down upcoming concerts that could get your hearts in the mood for love.
1. Tales of Love
Asia’s Golden Voice Gerphil Flores is conquering the Valentine’s concert scene by teaming up with no less than original balladeer Jose Mari Chan, the Manila Philharmonic Orchestra, and Junior New System for a two-night spectacle on February 11 and 12 at The Theatre at Solaire.
2. Valentine Playlist Nobody sings love songs like the R&B band Southborder and as a pre-Valentine offering, the group will be serenading their fans at the KIA Theater on February 12 together with their special guest R&B Princess Kyla.
3. Let’s Get Intimate If you are in search for some classic pieces such as that of Mozart, Rachmaninoff, Piazzola, and the like, then Clarion Chamber Ensemble’s concert on February 13 at the Little Theater at the Cultural Center of the Philippines is probably for you. The show will include soprano singer Rachelle Gerodias, baritone singer Byeong in Park, as well as various musicians like Juan Luiz Munoz on violin and David Jerome Johnson on flute, among others.
4. The World Famous Platters Certain ‘80s babies will probably be the first in line on the upcoming Platters concert on February 13 at The Theater at Solaire especially since they will be joined by the top Elvis Presley impersonator Johnny “Elvis” Thompson.
5. Your Alternative Valentine 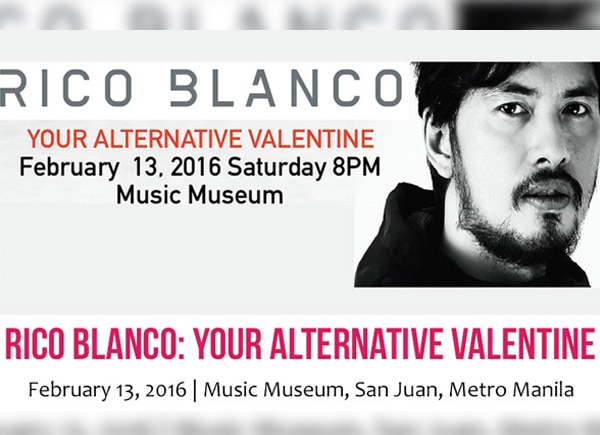 Rock star Rico Blanco is offering a “perfect alternative” to those who would not want the traditional sappy romantic songs with his aptly titled show on February 13 at the Music Museum together with Never The Strangers and Meg Fernandez.
6. #LoveThrowback A good number of people would always say that there’s nothing like the ‘90s in terms of romantic songs and this is what hitmakers Rico Puno, Marco Sison, Raymond Lauchengco, Gino Padilla, Chad Borja, Wency Cornejo, Roselle Nava, and Nina are out to prove in their February 13 show at the PICC Plenary Hall.
7. Celebrate Love Whether you are into local ballads or international romantic songs, Dennis Lambert and Joey Albert will be out to give you both on their show on February 14 at The Theater at Solaire.
8. Royals Regine Velasquez, Martin Nievera, Angeline Quinto, and Erik Santos pool together their powerful vocals for their first-ever concert together at the SM Mall of Asia Arena on February 13.
9. Love Catcher Despite gaining popularity in the US, the Philippines is and always will be Asia’s Nightingale Lani Misalucha’s home. This is why it did not come as a surprise when she chose to stage her Valentine’s show in the country on February 14 and 15 at the Newport Performing Arts Theater. Among her guests are Baihana, The Philippine Madrigal Singers, and Edward Benosa.
10. The Love Playlist of Carpenters and the Platters The Carpenters had love songs like no other and this is exactly what Laura Briggs and the Platters are bringing at the KIA Theater on February 15.
11. Comikilig: Panahon ng May Tama Instead of bringing the usual kilig, radio DJ Papa Jack is out to bring laughter to those who will troop to the Araneta Coliseum for their show on February 13. Joining the radio love guru on the show are Gladys “Chuchay” Guevarra, Ate Gay, and Boobsie Wonderland.
12. Angels Sing: Libera Valentine’s Concert If you are in for soothing and angelic voices, there’s the cute and melodic Libera choir’s concert on February 16 at the PICC Plenary Hall.
13. Boyce Avenue The Philippine Tour The most-viewed acapella YouTube sensation are back in the country to serenade their fans of with their best covers at the Smart Araneta Coliseum on February 16.
14. Kaka Kilig Pa More The good thing about the love month is that the singing and the romantic songs do not necessarily end on the Valentine’s weekend especially since The Philippine Madrigal Singers are out to stretch the kilig vibes during their show at the CCP Main Theater on February 20.
15. JaDine In Love

The perfect ending to the Otwolista’s love month would come from their beloved idols James Reid and Nadine Lustre who are finally staging their first-ever major concert at the Araneta Coliseum on February 20. Vice Ganda will be joining the bankable power love team on their show.
Celebrity