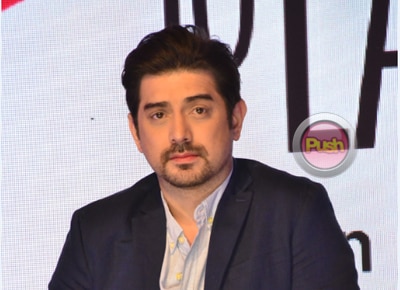 On Tonight with Boy Abunda, A Love to Last star Ian Veneracion admitted he isn’t comfortable singing in front of an audience.

In his role in A Love to Last, Ian plays the role of Anton who is musically-inclined and who composes songs. Asked how he did it when he admits to having “stage fright,” Ian said he thinks “it’s not me, it’s Anton singing.”

The 41-year-old actor also admitted to being “immature.” “I’m a 14-year-old trapped in a 41-year-old body. Yung naughtiness as a little boy is still there I don't think its ever going to go away.”

On Fast Talk, Ian said Bea Alonzo’s “eyes” make her sexy and if he were a woman, he would be “Eula Valdez.”

Asked for the “weirdest thing you've read about yourself on the net,” Ian answers, “I never read anything online.”

The one thing Ian can’t get enough of is “chocolates.”

Asked if his wife has access to his cellphone, Ian answered with a vehement, “no way!” He added, “it’s respect.” He also admitted to being seloso.

The hottest woman he’s worked with is “Alice Dixson.” The best time for alcohol is “Christmas” and his New Year’s resolution is to “exercise more.” Asked if size matters, Ian said, “of course.”