Erik Matti says his new project will be an East meets West epic. 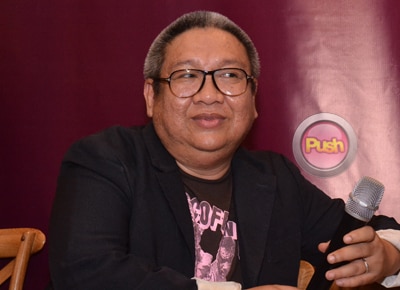 Apart from his current Metro Manila Film Fest entry Seklusyon, director Erik Matti is busy working on his ongoing projects including the first HOOQ online series OTJ, a movie with Anne Curtis, and the Darna remake. “Sa Darna we’re still developing it. We’re still finalizing everything so I still don’t know when we’re going to start. Wala pa, wala pa kaming na-shu-shoot eh. Darna is such a humongous project. There are a lot of things attached to it. It’s not just a movie that we’re going to shoot and then show in theaters, together with that there’s a lot more other components. There’s merchandising, there’s pre-sale and I think it’s good that everyone’s taking their time. It’s our first time to launch a superhero franchise so it’s better to make baby steps than rush it and end up a half-baked project. Angel Locsin is okay with her back now so we’re all on pre-prod now with other things,” he said.

Another big production Erik has been working on is a movie similar to Crouching Tiger, Hidden Dragon. "Pintakasi was a project that we worked on after Honor Thy Father and it’s a tough film to produce because it’s big. There’s American component in the story so we’re looking for North American co-producers. There’s also a Malaysian angle to the story so we’re also looking for co-producers in Malaysia. So that one we’re not yet sure with the timeline but happy kami that we already got the support of our two main cast members na si Piolo Pascual at si Dingdong Dantes. So I think that’s good,” he explained.

The Seklusyon director admitted that next year will be challenging because they want Pintakasi to be as ambitious as it sounds. "We were ready to produce it on our own until this Project Lab in Macau offered if we have a project that has an East meets West quality to it. So that’s the project that we have, there’s an American component, there’s Malaysian so medyo may Asian and may western angle so we sent them the sequence treatment and they all got back to us together with 11 other entries they approved our film for pitching with other companies not just Asian but even North American and European companies. So all 12 of us pitched the project and we were chosen as one of the winners. Mabigat siya eh kasi if we were to be ambitious then if there’s an American component that’s going to come in then it’s going to get a little bit more ambitious kasi may kukunin kang artista sa ibang bansa, mga ganun. We don’t know yet how difficult it is to do it. Ngayon lang naman namin naisip dahil after Macau, but prior to that we were just planning on doing it locally,” he said.

Apart from confirming Piolo and Dingdong as the lead stars, the rest of the cast including the female leads have yet to be confirmed according to Erik. "We still haven’t talked about that. There’s several women characters in the film but we’re very early into the project that we haven’t sat down. Our three companies haven’t sat down, Spring films, Agosto Dos, and Reality Entertainment, we haven’t sat down and finalized casting,” he added.