Ellen Adarna says Baste Duterte is ‘important’ to her

Ellen is still mysterious about her relationship status with Baste Duterte. 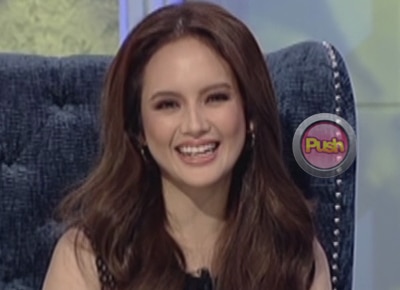 Sexy actress Ellen Adarna admitted that she dehydrated herself - the reason why she passed out during her recent nude photo shoot for a men's magazine, in her interview on Tonight With Boy Abunda aired on Monday, December 26.

READ: Ellen Adarna reveals she passed out during her nude photo shoot

"Three days before the shoot, which I normally do 'pag mayroong photoshoot, I dehydrate," she confessed, adding that it makes her lose five pounds of water weight.

"Hindi ko inexpect na it will be under the heat of the sun kasi usually 'pag shoots, sa studio lang so 'yun, nahimatay."

"We had to stop (the pictorial) and then, nagdecide na nga sila na parang i-pack up na 'coz my blood pressure was really low na raw and then I said na wala ng other time kasi aalis na rin ako, may vacation ako that time," she said and asked for an hour to rest instead.

When asked about presidential son Baste Duterte, Ellen just laughed and told Boy Abunda that she will post about their status on her social media.

She however described Baste as caring and a very down-to-earth person.

Trying not to give the TV host a direct answer, Ellen also admitted Baste is an ‘important’ person in her life.