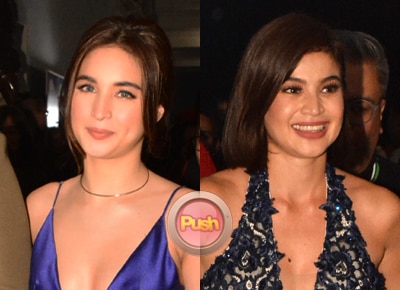 Before she goes abroad to spend Christmas in Europe, Coleen Garcia shared what she plans to change for next year. “I'm going to be in Spain with my entire family and ayun first vacation ko with my family and Billy (Crawford) is also going to be there. For 2017, gusto ko maging mas organized kasi minsan sa sobrang busy natatambak yung mga gamit ko, hindi ko na naaayos mabuti and I’m really the only one who can fix my stuff kasi ako lang nakakaalam. So siguro yung maging mas organized ako sa gamit,” she shared during Star Cinema’s Extra Service presscon held last December 18 inside the ABS-CBN compound.

The 24-year-old actress also shared why she can’t pick out her sweetest moment with boyfriend Billy Crawford. "This year? Ang dami eh. He’s sweet to me every single day. Alam mo it’s more of a collective effort kasi every single day ume-effort talaga siya to see me. He always makes an effort to make me happy on a daily basis. And for me yun talaga yung pinapahalagahan ko, yung consistency.”

After getting baptized into the Victory fellowship last month, Coleen said she looks forward to Billy doing it soon too. "Siguro mas na-reinforce lang yung mga alam ko na sa kanya na sobrang patient siya, sobrang understanding and this year was a year of discovery for us. I got baptized and then siya gusto niya rin sumunod so towards the end of this year we discovered a lot of things also,” she explained.

With the news of Anne Curtis’s engagement last weekend, Coleen said she is happy when she first found out about the news the day before it spread on social media. "I knew yesterday kasi she told everybody yesterday. She told sina Billy, all of that so I found out yesterday. Sabi ko na I think she’s next kasi it’s about time also. She’s at a point in her career where she’s achieved so much so whatever she does with her personal decisions she’ll be fine. So ayun it’s about time na rin kasi all her friends na rin in their barkada got married. Ano siya cherry on top kasi siya yung huli pero I have a feeling her wedding is going to be so nice,” she said.

As for herself, Coleen and Billy have been inseparable ever since they admitted to dating in 2014. Billy just sprung a surprise proposal to Coleen yesterday, December 20. The actress reportedly said yes.