Tommy Esguerra on Miho Nishida’s daughter Aimi: ‘She’s getting us together’ 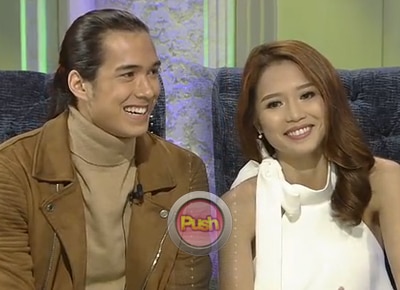 On Tonight with Boy Abunda, Tommy Esguerra and Miho Nishida admitted they get jealous.  Miho said that she doesn't get jealous when it has something to do with work but if a girl is flirting with Tommy and it has nothing to do with work, “Ibang usapan na yun.”
Tommy also recounted an instance when he got jealous. He was showing her a photo of himself and his friend when Miho said, “oh cool, ang cute niya ha!” He said of the incident, “I was showing her MY photo!”
Tommy gets along well with Miho’s daughter Aimi. He said, “she knows (about us). She’s a pusher. She’s getting us together.”
Asked when they will get married, Miho reacted, “married agad?” Miho revealed she calls Tommy “baby.”
Celebrity