Liza Soberano shares what she’s most thankful for in 2016

Liza Soberano admits she will spend her birthday abroad with Enrique Gil. 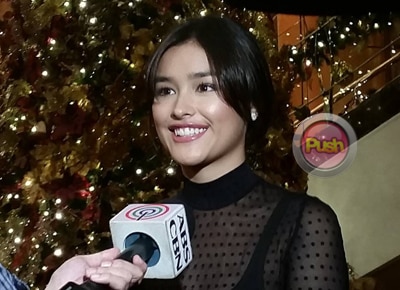 As part of one of the busiest love teams in the country today, Lisa Soberano said she is excited to show her fans her new Star Cinema movie with Enrique Gil called My Ex and Whys as well as a new soap in the works for next year. "It’s directed by Cathy Garcia-Molina so it’s going to be showing in 2017 na so they moved the airing of the movie. So yun ang dapat abangan. It’s going to be a very special treat for everybody in the next year. About the new teleserye as of now we really don’t have any idea what the story is about or who is going to be directing it but there are rumors that we are going to be starting it very soon so we’re pretty excited for that,” she shared.

With one month to go before the New Year, Liza says she still hasn’t though of her new year resolution. "I never really think about a New Year’s resolution so I always say diet lang yun lang (laughs). But this year my first thought was to be more generous. I’ve kind of wanted to work on more on more charitable events next year and do some special projects,” she admitted.

Ever since she joined showbiz three years ago, Liza’s popularity has grown and made her one of the most successful artists in showbiz. But the 18-year-old actress continues to be humble and thankful for her earlier projects. “For me if I had to choose one of the happiest moments of this year, it would be Dolce Amore. I think it’s the highlight of our year because it took up most of our time this year and also it was very special to us because we got to go abroad, we got to work with direk Mae Cruz-Alviar din and we learned a lot during that show,” she said.