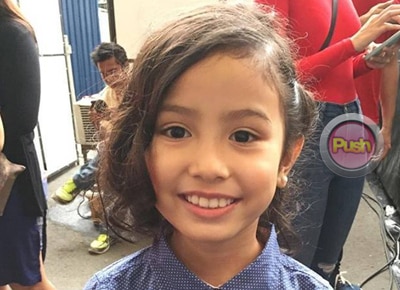 Even at such a young age, child star Jana Agoncillo was already able to name her style icon—for her it is no less than Janella Salvador.

Jana recently got the chance to work with Janella on the set of their upcoming Metro Manila Film Festival titled Mano Po 7.

Jana was launched as part of the newest batch of Moose Gear and Moose Girl ambassadors along with Raikko Matteo, Josh de Guzman, Marco Masa, Ashley Sarmiento and Mitch Naco in time for the holidays.

Although she has previously appeared on a Metro Manila Film Festival entry, Jana excitedly shared that it is her first time to land a title role.

Jana is part of the family of Janella, Jean Garcia, Richard Yap and Enchong Dee on the movie.

Aside from giving her chocolates on the set, Jana treasures how Janella is a good example for her.

Even if she was able to fulfill one of her dreams through her upcoming movie, the young actress has a few more things to achieve on her least, among them is working with her Ate Liza Soberano. She also wants to work with Ang Probinsyano’s Arjo Atayde.

Aside from her upcoming movie, Jana also recently appeared on the afternoon soap The Greatest Love.