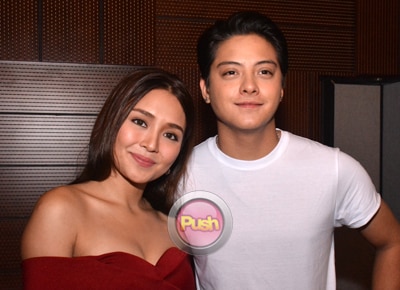 Kathryn Bernardo, Joshua Garcia, and director Olivia Lamasan weren’t able to hold back their tears during the thanksgiving party of their film Barcelona: A Love Untold.

Kathryn began crying after hearing the praises given by Direk Olive to their co-star Joshua who played the role of Tonying in their film. When she took the stage, tears further flowed on her face as she thanked their film’s cast and crew.

It was announced that the film has grossed P321 million worldwide after four weeks of being in theaters.

“Ngayon lang nagsi-sink in sa akin na parang ‘we did it,’” she continued.

Daniel, for his part, said that he was also on the brink of tears while listening to the messages of the other Barcelona staff members.

The actor stressed that he was nevertheless grateful to the many people who made their film possible.

The tandem is set to fly to Vietnam next week for the premiere of their movie in the country, which is happening at the BHD Star Cineplex on December 4.

Kathryn and Daniel have a solid following in Vietnam after receiving Vietnam’s Face of the Year Awards for their performances in the hit series Got to Believe early last year.