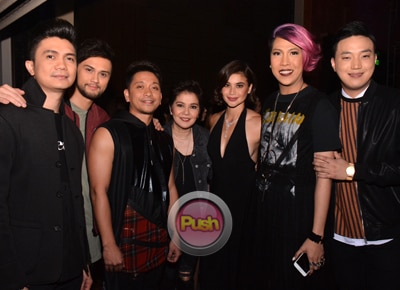 ABS-CBN gave a sneak peek of the upcoming shows for 2017 during its star-studded Christmas Trade Launch at the Marriot Grand Ballroom on Tuesday, November 22.

Fans of Liza Soberano and Enrique Gil will get to see their favorite love team on the big screen next year with the Cathy Garcia-Molina romance-comedy film titled, My Ex and Whys.

Although this new daytime show will start showing next week in place of the Erich Gonzales-Daniel Matsunaga starrer Be My Lady, guests were also given a preview of what to expect in Langit Lupa.

For Koreanovela fans, Korean superstar Lee Min Ho will be back on the small screen with the Legend of the Blue Sea that tells of a love story with a mermaid.

Also, fall in love with a girl who pretends to be a boy in an imperial palace in the Korean ‘kilig’ drama, Love in the Moonlight.

Carrying the tagline, “Revenge has never been this wild,” viewers will get to witness a vengeful yet sexy Maja Salvador in her upcoming teleserye titled Wildflower.

Former TV5 star Ritz Azul will be paired with Paulo Avelino and Ejay Falcon in her first teleserye on the Kapamilya network called, The Promise of Forever. This drama series offers a different kind of love story as Paulo’s character has been cursed with immortality, living as early as the year 1885. Some of the scenes of the show were shot in Europe.

Celebrating their 10th anniversary in the industry, Kim Chiu and Gerald Anderson’s reunion drama series, Ikaw Lang ang Iibigin’s trailer talks about two people who started out together, parted ways, yet chose to return to each other in the end. This show also stars Coleen Garcia and Jake Cuenca.

A heartwarming drama series, My Dear Heart tells the story of a little girl named Heart. Suffering from a heart problem, her arrogant surgeon-grandmother, who is not on good terms with her parents, failed to keep her alive. Hence, her ghost haunts her grandmother, seeking for help. This tear-jerking show stars Zanjoe Marudo, Bela Padilla, and Connie Reyes.

Viewers will find a new love team in Ian Veneracion and Bea Alonzo’s upcoming show, A Love To Last.

Speaking of love teams, Kathryn Bernardo and Daniel Padilla are also set to star in the fantasy teleserye titled, La Luna Sangre. According to a tweet by ABS-CBN entertainment journalist MJ Felipe, this show is the third installment of Lobo and Imortal which previously starred Piolo Pascual and Angel Locsin and Angel with John Lloyd Cruz respectively.

Celebrities will also partake in the new game show franchise titled I Can Do That.