Made It: Five best moments at #MatteoMadeinCebu 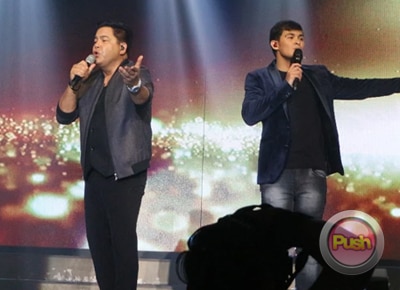 Matteo Guidicelli has accomplished another thing on his list of goals by packing WaterFront Cebu City Hotel Lahug to the brim for his first ever concert in his hometown touted as #MatteoMadeinCebu.
The singer’s “dream team” composed of his director Rowell Santiago and musical director Louie Ocampo helmed his 10th anniversary concert. The three-hour spectacle had him singing songs which were dear to him and songs that he dedicated to the special people in his life, including songs by and with his idols.
But there were five moments that truly stood out during the entire concert apart from the surprise appearance of his ladylove Sarah Geronimo who sat beside the Guidicelli family and his performance of the Cebuano hit “Hahaha Hasula” together with its original singer Kurt Fick.
1. Changing the lyrics of ‘Wag Ka Nang Umiyak’ Much to the concertgoers’ delight, Matteo brought kilig vibes on his concert during his performance with his KZ Tandingan of this hit song “Wag Ka Nang Umiyak.” While singing the last part of the song’s chorus, Matteo worded it in such as way that it said: “Hindi ko siya pababayaan” which the crowd seemed to have speculated was pertaining to Sarah.
2. Italian version of ‘Say That You Love Me’

Despite failing to stage what could have been the biggest Mannequin Challenge with Martin Nievera and the audience, Matteo was successful enough in singing an Italian version of the Concert King’s hit “Say That You Love Me.” His heartfelt version was well applauded by the crowd. The split screen has done wonders for a number of performers these days including Matteo who got to sing “Babaero” with his idols Rico and Randy who were present via a split screen video.
4. Ricky Martin medley Apart from showing off his abs, the finale performance became special because it had Matteo performing with a number of young Sinulog dancers who donned vibrant costumes filled with glittery feathers and stone-embellished suits during their segment.

5. Songs for his loved ones Amid the utter showmanship that he displayed from singing modern songs like “Cake by the Ocean” to old songs like Martin’s hits, the ones that still counted the most were those with stories of love and affection.
Matteo dedicated a few songs for his loved ones including his ever-supportive family, his late grandfather who inspired him to take his Dolce Amore character, his co-Cebuanos and his dear Sarah, with whom he dedicated the song “Of All The Things” to.
Celebrity