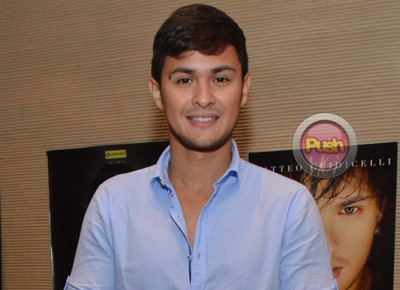 Matteo Guidicelli did not mask his excitement over the good luck video made by PNP Chief Ronald “Bato” Dela Rosa just in time for his #MatteoMadeinCebu concert on November 18 at the WaterFront Hotel Lahug.

“I’m very thankful kasi he’s just a very simple and down to earth person. Talagang appreciates and supports another fellow Bisaya. He’s a very nice guy,” he said in an exclusive interview with Push.

The “Ipapadama Na Lang” singer shared that the famed PNP chief is a Bisaya too.

“He’s Bisaya and you know all bisayas are close together. You know once a Bisaya always a Bisaya,” he said with a smile.

The hunky actor came to know the chief since “One of his spokespersons, he’s my trainer.”

Apart from that, Matteo shared having the chance to sit down with him.

“So when we worked on Across the Crescent Moon, I had dinner with him for a couple of times for research for the movie and all that stuff,” he said.

Did he invite the PNP Chief to his concert?

“Yeah, yeah I’ve invited him and he has issues right now eh. So he sent the video nalang instead,” he said.

Chief Bato got into hot water due to his recent trip to the US where he caught Senator Manny Pacquiao’s fight against Jessy Vargas in Las Vegas.