REVIEW: ‘Toto’ puts forward the importance of luck and decency 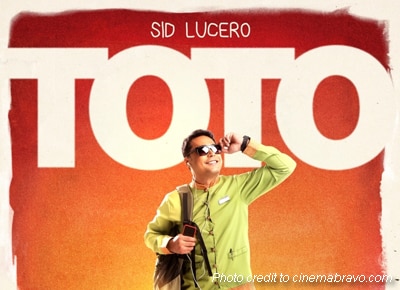 As more films delve into the importance of hard work and determination, JP Su’s first full feature film Toto puts primacy on the significance of luck in a person’s success, as well as its relativity.

Coming right on the heels of America’s election of a new president who has expressly shown his disapproval of immigrants, Toto follows the story of Antonio “Toto” Estares, a man whose desire to get a US visa is greater than his value for his relationships, job, heart, and even dignity.

Toto is a hotel bellboy in Manila played by Sid Lucero who hails from typhoon-ravaged Tacloban. Veteran star Bibeth Orteza plays his strong-willed, cancer-stricken mother while Bembol Roco is his distracted father who was able to make it to Las Vegas as a stage act but ended up becoming a dishwasher who drinks and gambles away his money.

Visually, Toto is anything but indie-looking with its comic editing style in some portions, unique musical scoring, and fast-paced editing.

In order to add depth to the story, the director-cum-screenwriter made sure to add colorful characters such as Yam (Thou Reyes), Toto’s ever-supportive-and-resourceful-closet-gay cousin and Tessa (Mara Lopez), Toto’s practical apple of the eye who constantly reminds him that success is not in the US alone.

There’s also Eve Porter (Liza Diño), the con artist who lured Toto into a trap with her oozing charisma and David Yeltsin (Blake Boyd), the stranger who took it upon himself to educate Toto about the good and bad side of his great American Dream.

While the other characters greatly affected his decisions and actions, it was Toto’s flawed reasoning, sheer determination, and borderline desperation that will make the audience love and hate him at the same time. Sid did well in breathing life to Toto as his innocent features complemented his character’s very traits.

Thou’s colorful character Yam is very adorable especially with the way he looks after Toto, may it be in pursuing his American Dream or keeping his life intact. Another memorable character is Toto’s mother who Pests him of all his delusions and reminds him of what really matters.

The story’s flow was at a moderate pace, which the audience can easily follow. While it’s endearing to see Bembol Roco in a dancer’s ensemble, his random appearances, especially for those who haven’t seen the film since the beginning, might cause a little confusion as to whether or not he was real or just a figment of Toto’s imagination.

Some of the story’s twists, especially with Eve Porter’s character, seemed a little expected but overall, Toto reminds you that things can go really, really bad and things can go really, really good. It’s your reaction to these opposite situations that define you as an inPidual. It also brings forward the idea that although hard work can get a person places, sometimes fate has a different way of bringing the person to where he wants to go—literally and figuratively.