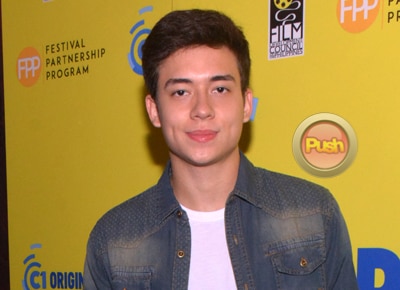 It’s Showtime Hashtags’ member Jameson Blake described getting to the C1 Originals Festival 2016 as a big thing for him and his career. “I’m just new to acting and this is my first movie over all so it’s pretty (much) a challenge but I like learning,” he said. Jameson stars in the independent film entry, 2 Cool 2 Be 4gotten.

Saying that he enjoyed the experience, Jameson added, “It’s really good. I learned a lot, from small things to big things when it comes to acting.” He said that the production team and his fellow actors were all nice to him.

“Ang bilis ng panahon, eh. It feels like six months pa lang,” he said, acknowledging that the group started his career, hence, he calls them a blessing.

Jameson also said that there is no competition between the members.

“We fully support each other in everything we do and we’re proud of each other. I’m actually proud of McCoy (de Leon), si Ronnie (Alonte). They’re really having big steps in their career and I’m proud of them,” he said.

When asked if he wants an on-screen partner of his own, he replied, “It’s okay. I don’t mind. I’m not really like looking for it naman pero if the opportunity comes, siguro I’ll take it.”

Aside from It’s Showtime, Jameson, who was a housemate of Pinoy Big Brother 737, also makes guest appearances on other ABS-CBN TV shows like Umagang Kay Ganda, among others.