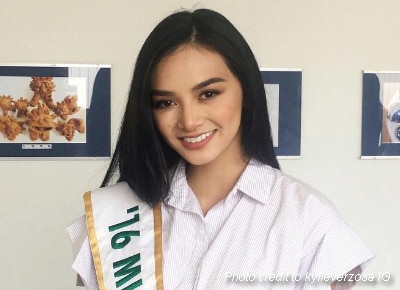 She immediately went to a meet and greet with the entertainment media at the Novotel in Cubao.

Acknowledging people who helped her all throughout the competition, Kylie said, “This is not only my journey but your journey as well. And I’m so glad that I’m here, making you guys proud. That makes me the happiest.”

According to Kylie, spending time with her fellow contestants was one of her most memorable experiences during the pageant. She also mentioned about touring Japan.

Talking about her winning speech during the pageant’s question and answer portion, Kylie thought she could have done better, adding that it was not as perfect as she wanted to be. Nonetheless, she said that she did her best.

Meanwhile, Kylie also shared the story behind her photo with Philippine President Rodrigo Duterte in Japan.

“No, he did not visit me. He was at a conference in Japan, it was at a state visit to Japan. A lot of people think I met him. No, I chased him for a selfie. I met him for one second. But what I like about that, he stopped for me. He didn’t stop for anyone else but me,” she said, adding that she appreciated the gesture.

When asked how their conversation went, she narrated, “’Yung kasama ko, sabi niya, ‘President, si Miss Philippines.’ ‘Pres, pa-picture.’ I was fan-moding (sic). I’m a fan. And he said, ‘O, Philippines.’ He saw my sash. So he stopped and took a picture with me.”