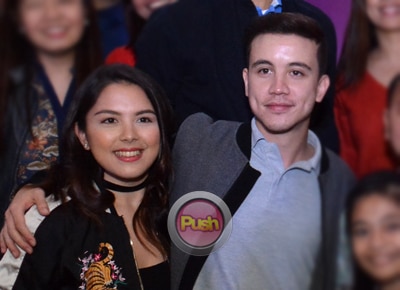 Even though she still considers herself a newbie in show business, Ria Atayde has already made a mark with her first acting project in Ningning last year. The 24-year-old actress will be working on her first online mini-series with the HOOQ Originals series OTJ Season 1 where she will join her older brother Arjo as part of the cast. "Actually nung in-offer sa kanya yung OTJ ako yung kinontact nila. They told me that they’re trying to get nga Arjo so ako parang, ‘Aww that’s so nice! It’s our dream to work with direk Erik Matti.’ And biglang I think a week or two after they contacted me to say, ‘Ria are you free tomorrow because direk Erik also wants to cast you,’” she told Push.com.ph.

The OTJ the series actress admitted she was already a big fan of the original 2013 OTJ film which starred Gerald Anderson and Piolo Pascual even before she got the new role. "Yeah I watched it of course. I think it was one of the best Filipino films I saw in the later decades of Philippine cinema so while watching the film I thought it was such a good movie. Everybody has to see it. After seeing a movie that is super nice like that and to be part of this one now, sobrang nakakakilig na now I’m part of it pa,” she admitted.

Ria said she and her brother are finally fulfilling one of their dream projects together. “First off, it’s already such an honor to be part of the series itself and to be working with my brother which is a dream we both have always had since I entered the industry. It’s really, really an honor and it’s nice. Such an amazing platform to start working on with my brother,” she added.

Although they have yet to start shooting scenes for the online series, Ria is hoping she and Arjo get the chance to act in many scenes together. "So far wala pang sinasabi pero I know for a fact na yung dad ko sa series si Sisoy played by Tito Teroy (Guzman) will be interacting with Bela (Padilla) so I guess somehow we might have. Hopefully sana meron kasi eventually I know my character will go to Manila din,” she said.