Lauren Kate also revelas the inspiration for her novel ‘Fallen’ 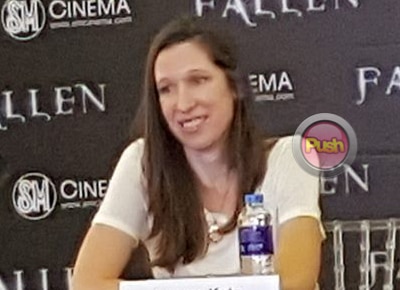 "The story started in me when I was in graduate school. I was in class and looking at the verses in the bible and in our first day of class our professor was reading the book of Genesis aloud and she said the line ‘the sons of God look down from heaven and they saw the daughters of men and they thought that they were beautiful.’ That’s a very simple line but this professor said that she believes and a lot of people believe that it might be the reason that God keeps Lucifer out of heaven."

"Writing for the Young Adult is wonderful. The enthusiasm of my readers is so big and so genuine."

"Being in the Philippines is a rather important place. It’s the place for one of my very first book signings. I was impressed by the crowds. I’m thrilled to be in touch with some of the other readers that I’ve met," pagtatapos ni Lauren.