Lovi Poe on doing a love scene with Christopher de Leon: ‘I got so intimidated’

Lovi Poe talks about how she feels about her comeback mainstream movie. 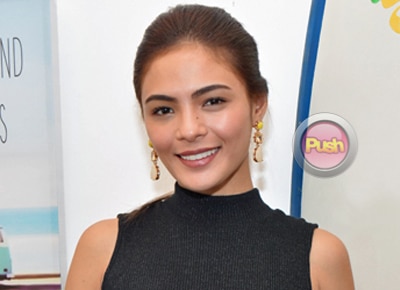 In the upcoming Regal Films project The Escort, Lovi Poe plays the role of Yassi, a simple hardworking receptionist for an escort agency. For the 27-year-old actress, doing the film was a way to educate the viewers of how life is for an escort in the country. "Well first of all when they told me it was going to be with Derek (Ramsay) and sir Boyet (Christopher de Leon) it’s already a given. It’s a definite yes already. Aayaw pa ba ako? (laughs) yung ganun. And aside from that the story is amazing. When I read it as in may mga parts na nagugulat ako na may mga ganun pala. I couldn’t say no. What we can offer here is aside from the fact that we are actually opening everyone’s eyes to the escort business is the fact that there’s a real story behind every woman or every man kung bakit sila naging escort,” she shared

Lovi said she had no hesitation accepting the sexy role despite the possibility of criticism. "Ako I do things for the sake of art. So actually anything that comes in my way that I’m interested in, whatever it is, I will accept. In the film, there is a huge transformation for my character. Siguro gustong gusto nila si Yassi because she’s a virgin so parang they’ll show you the transition of someone who had to actually turn into an escort. In turns of movement and everything I can say that Yassi is very raw since this was her first time,” she explained.

One of the sexy scenes she had to do in the movie was with veteran actor Christopher de Leon. "He was across the table and just drinking his scotch. Parang I got so intimidated. And then he started delivering his lines. It was just amazing. It was just so different. I’m happy that we stuck with the script because he delivered it very amazingly,” she recalled.

Working with Derek Ramsay for the first time was also memorable for Lovi. “Siyempre gustong gusto ko siya makatrabaho and then eventually it happened. He’s a very nice guy. We actually got along so well. Everything just came out naturally especially sa mga scenes na kailangan na medyo sensitive and sexy. He really took care of me. Alam mo kasi pag ang isang tao nag-te-take advantage sa iyo ramdam mo yun. So never. Not even with sir Boyet at all. So I’m very thankful and I’m really grateful sa kanila kasi not once did I feel uncomfortable,” she admitted.

The Escort actress said the movie isn’t just about her intimate scenes with her leading men but an eye opener for those who have no real idea what an escort’s life is all about. "Siguro maipapakita namin dito na kakaibang istorya ng babae na minsan ay luho minsan kapit sa patalim. So abangan nila yun sa pelikula na ito. It’s like showing the drama behind it. It’s not actually defending, it’s just stating facts I think. It’s a way of understanding how these women got into this business. I think it’s one way to redeem just the fact of the word the escort itself,” she said